On Sunday 24th July, 24 members and guests competed for the Chairman’s Shield. This is a doubles competition for which the pairings are drawn at random.

The early stages saw some close and competitive games but the highlights were 21-20 wins for Les Miller and Joe Parker against Shirley Kelly and Leo Tobin and also for Roy Heyes and Bill Nowell, who overcame Pat Higgins and Ray Lowe by the same margin. The winners of these games then faced each other in the semi-final and although at one stage it was looking like it was going down to the wire, Les and Joe progressed to the final with a 21-15 success.

In the top half of the draw one of our guests for the day, Mark Eustace, was drawn to partner seasoned campaigner Bill Nuttall. With the help of Bill’s experience and knowledge of the green , Mark and Bill were able to reach the semi-final with wins against Harry Brown and Pat Miller (21-7) and Jim Huyton and Norman Parry (21-16). In the semi-final, they came up against the pairing of one of last year’s winners, Eileen Curtis, and Alan Bond, who has produced some good performances in his first season at the Hesketh Arms. With Eileen putting up some consistently good leads, it was Alan and Eileen who won a close game 21-17 to reach the final.

The final was an exciting game which could have gone either way but in the end the Chairman’s Shield went to Les Miller and Joe Parker, overcoming Alan and Eileen with a 21-18 victory. Congratulations to Les and Joe on their first competition success at the Hesketh Arms.

Members are reminded that the next club competition is The Championship Cup on Sunday 14th August, followed by the re-arranged President’s Cup a week later on Sunday 21st August. Both competitions will start at 1.00pm

Sunday 10th July saw another good entry of 27 players taking part in the Club’s latest competition, The Coronation Cup.
Following some close games in the early rounds, the semi-finals brought together Alan Bond v Mike Dunlop and Jim Finnimore v. 2010 winner, Margaret Langley.
Alan Bond, in his first season at the Hesketh Arms, had goods wins in the early rounds against Pat Jones (21-19) and John McGurk (21-14) before meeting Brian Jones in the quarter-final. This proved to be one of games of the day with Alan scoring two at the final end to win through to the semi-final 21-20. In the semi-final Alan came up against Mike Dunlop who had been in fine form all day, recording wins against Harry Brown (21-18), Beryl Jackson (21-18) and George Hitchmough (21-11). Mike continued his good form in the semi-final to record a comfortable 21-8 win. 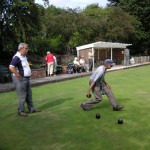 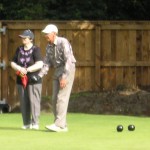 In the bottom half of the draw, Jim Finnimore had progressed to the semi-final with wins against Norman Parry (21-20) and Bill Nowell (21-10) to face Margaret Langley who did well to overcome the disadvantage of playing off scratch to overcome Shirley Kelly (21-20) and Richard Rawcliffe (21-14). Margaret continued to play well in the semi-final against Jim and reached the final with a 21-10 success. 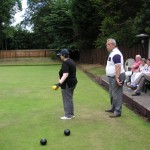 The final saw Margaret, playing off scratch after several competition victories in recent seasons, playing Mike Dunlop, in his first Hesketh Arms singles final. Starting on +4, Mike got got off to a flying start which was to prove decisive. Despite Margaret bowling well, Mike continued to play as he had been doing throughout the competition and eventually won the final 21-5 to take the 2011 Coronation Cup