SEPTEMBER ROUND ROBIN
Sunday saw 20 members attend the final weekend event of the season. After some closely fought games, third place went to Mike Milne with +12 and 2 wins. Connie Southern took second prize with the same +12 aggregate but with three wins, whilst 1st place went to Club President Ray Sutton by one point with a score of +13. 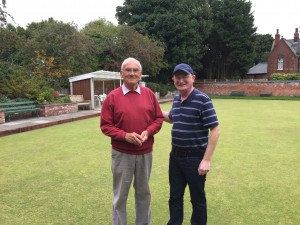 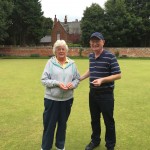 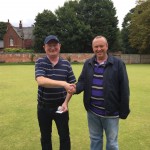 Many thanks to all those members who have supported the club competitions and round robins this season, all of which have been well-attended. Members are reminded that the popular midweek round robins, organised by Jim Finnimore, will continue for the next two weeks, with the last event of the season taking place on Friday 2nd October, 10.00am start.

GREEN CLOSURE
The green will remain open for the weekend of Saturday 3rd and Sunday 4th October, after which it will be closed to allow our contractor access to carry out the annual end of season maintenance work. I am sure members will agree that the green has been in excellent condition this season, thanks to the specialist work carried out by Andrew Church and Lancashire Turf Supplies, in addition to the regular cutting carried out by our greensman. The Club are also greatly indebted to one of our Honorary Vice-Presidents, Mr.Bernard O’Malley and Nationwide Produce, for the continued financial support towards the costs incurred in keeping the green in such fine condition.

AWARDS EVENING
Please remember to order your tickets for the Club’s Awards Evening, which will take place at the Churchtown Conservative Club on Saturday 17th October, starting at 7.30pm. Tickets are priced just £5.00 and can be obtained by any Committee Member or Team Captain.

THE BERNARD O’MALLEY VICE-PRESIDENT’S TROPHY
Saturday saw the club hosting it’s first junior open singles competition, which attracted entries from Formby, Ormskirk, Leyland, Wigan and Shevington, in addition to bowlers from local clubs Hesketh Arms, Botanic Gardens, Scarisbrick Bowling Club and Mere Brow.
The early stages of the competition saw some close battles, including an excellent preliminary round game between Archie Rimmer (Scarisbrick Bowling Club) and Matthew Brown (Fox Lane, Leyland), with Archie emerging the winner by a narrow 21-19 margin. Archie was involved in another tough game in the last 16 as he just lost out to his clubmate James Catton by the same 21-19 scoreline. Other notable games in this round were wins for Kes Adams (Scarisbrick B.C.) against Luke Sinnott (Formby Sports & Social) and a 21-19 success for Matty Greenwood (Mere Brow) against Matthew Gill (Windmill, Ormskirk).
Following his win against Luke Sinnott, Kes Adams progressed to the semi-finals in the top half of the draw with a 21-14 win against Luke Dawes (Botanic Gardens). His semi-final opponent was Luke’s brother Kyle, representing the host club and therefore one of the favourites to take the title. Kes started strongly in the semi-final, however, winning 10 out of the first 12 ends to establish a 13-3 advantage. Although Kyle fought back with a couple of 2s the deficit was too much to overcome and Kes ran out a 21-10 winner.
In the bottom half of the draw, Matty Greenwood followed up his narrow victory against Matthew Gill with a more comfortable 21-14 win against Philip Rawlins (Formby Sports & Social). This took him into the semi-final, where his opponent was another homester, Fergal Wright. Fergal had reached this stage with wins against Danny Hurst (Shevington) and Jack Harrison (Scarisbrick B.C.) Matty and Fergal are both members of the successful Botanic Gardens junior team and this was expected to be a close contest but when leading 10-3, Matty appeared to be favourite. However, trailing 10-3 and with Matty counting with a bowl next to the jack, Fergal rested this bowl out to leave himself with two. This was to prove a turning point as Fergal won the next seven ends, to take control of the match and lead 15-10. Although Matty fought back, winning three out of the next five ends, it was Fergal who reached the final, the scoreline being 21-14.
The outcome of the final was hard to predict but Fergal again started slowly and Kes looked to have the final under control when leading 12-4. As in his semi-final, Fergal fought back and with the help of four 2s in eight ends drew level at 15-15. From this point, the contest was nip and tuck with neither player able to find the leads to finish their opponent off but in the end it was Fergal who found the winning bowl on a long mark to win a hard fought final 21-19 to become the first winner of the Bernard O’Malley Vice-President’s Trophy. 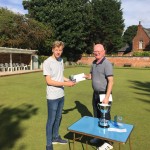 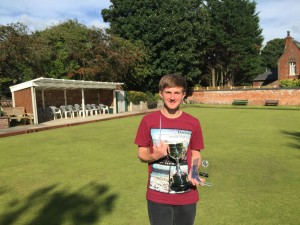 At the presentation, Chris Harding, Chairman of the Hesketh Arms Bowling Club, thanked the Club’s Honorary Vice-President, Mr.Bernard O’Malley for all his support towards the club over a number of years and for agreeing to have this tournament held in recognition of his contribution towards the club. 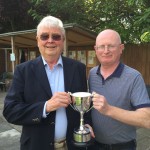 He went on to thank all those who had helped in the planning and organisation of the event, including the Committee of the Hesketh Arms Bowling Club, George Hitchmough, Mike Milne, Ian Gill. 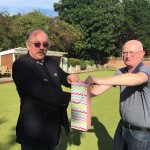 Special thanks are especially due to Graham Pickavance, who was our referee for the day. Finally, Chris thanked all the measurers and markers who had helped to ensure that the competition ran smoothly. 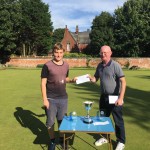 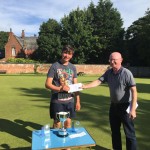 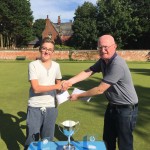 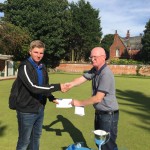 The Club look forward to holding this event again in 2016

The Round Robin held on Sunday 30th August saw a good turnout of 26 members taking part. In 4th place, with a score of +10, was Pat Miller. Our President, Ray Sutton, was 3rd on +13 with Jim Finnimore taking 2nd place with +18. The winner by 3 clear points, however, was Dave Bedford with an impressive aggregate of +21.