VICE-PRESIDENTS TROPHY 2015
The improved weather brought a good turnout of 30 members to the green on Saturday for the Vice-Presidents Trophy. This is the second of the club’s random pairs competitions and in the top half of the draw Margaret Langley was looking to complete a clean sweep of doubles titles, having previously won both the Chairman’s Shield and Spring Pairs twice. Margaret was drawn to partner Alan Bond and they were to progress to the final with good wins against Jim Halsall and Irene Nowell (21-15), Richard Rawcliffe and Norman Simpson (21-10) and Mike Burrill and Chris Harding (21-15).
In the bottom half of the draw, this year’s Rose Bowl winner, Fergal Wright was drawn to partner Jason Chapman. Having received a 1st Round bye, Fergal and Jason had a tough encounter in their first game against Jon Roberts and Mavis Thompson, eventually winning by a narrow 21-19 margin. Their semi-final opponents were the strong pairing of Bill Nowell and John Stennett who had reached the semi-final satge with wins against Jim Finnimore and Vera Johnson (21-20) and Mark Rowlinson and Connie Southern (21-10). The extra game may have proved to be a disadvantage for Bill and John as Fergal and Jason were able to continue there good form to reach the final, the winning score being 21-14.
The final was a fitting decider to the competition and could have gone either way, with Alan and Margaret looking likely winners when leading 14-10. However, at this stage, Fergal and Jason produced a strong finish, winning 8 out of 10 ends to complete a 21-16 victory to deservedly take the 2015 Vice-Presidents Trophy. Congratulations to Jason on winning his first Hesketh Arms title and to Fergal on his second Hesketh Arms success this season.

The consolation plate competition was won by Jim Halsall and Irene Nowell with a 15-8 win in the final against Mike Dunlop and Laurie Townson. 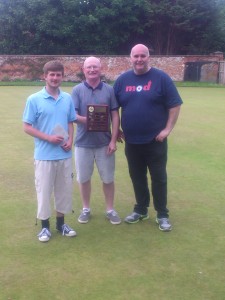 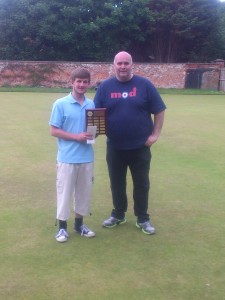 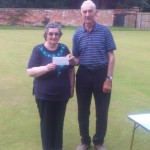 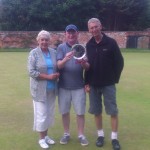 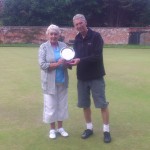 On Saturday 13th June, we again hosted the Churchtown Conservative Club’s annual bowling competition, when members compete for the B.J.P.O’Malley President’s Trophy. On a fine day, the main competition was won by Mike Milne and James Martins, who defeated Chris Harding and Alan Lloyd 21-13 in the final. A consolation competition was held for 1st round losers and this was won by John Unsworth and Noel Morgans with a 15-5 success against Heather Menzies and Dave Pritchard.

The Club’s second singles competition of the season took place on Sunday 14th June when 23 members took part in the Coronation Cup.

One of the winners of the Club’s previous competition, Mike Dunlop (winner of the Spring Pairs, partnered by Connie Southern), was again in fine form, reaching the final with wins against John Tomlin (21-6), Connie Southern (21-20), Alan Bond (21-10) and Dave Bedford (21-16). Mike’s opponent in the final was John Unsworth, who had enjoyed impressive victories against Brian Jones (21-19), Leo Tobin (21-15) and Margaret Langley (21-16).

As a member of the Eagles, the Club’s Premier Division LV team, John had to concede a handicap of 2 against Mike and although John won the first end, it was the experienced Mike Dunlop who dominated the final, scoring five 2s in the first 9 ends to establish a commanding 15-1 lead. Although John rallied to close the gap to 9-16 by winning six out of the next seven ends, Mike was able to maintain his consistent form to win the final by a comfortable 21-9 margin. Congratulations to Mike on winning a competition which he previously won in 2011. 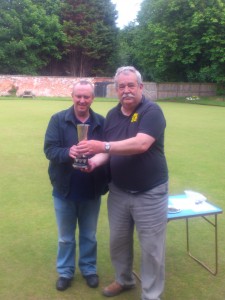 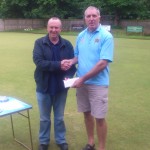 Participants in the main event who lost in their first game competed for the Diamond Jubliee Plate and this was won by Jim Finnimore with a 15-5 win in the final against John Tomlin. 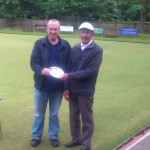 Please note that the green will be unavailable for use by members on Sunday 26th July as it has been hired out for a private event. The Committee apologies for any inconvenience caused.