Another good turnout of 32 members took advantage of a rare sunny day to take part in the Club’s latest event, The President’s Cup. It was particularly pleasing to see five members entering their first club competition.
In the top half of the draw, Club Secretary George Hitchmough was in impressive form, reaching the semi-finals with wins against Gill Atkinson (21-17), Joe Parker (21-13) and Bill Nowell (21-18). George’s semi-final opponent was last year’s winner Sue Andersen, who overcame new member Alex Rimmer (21-10), Dave White (21-6) and Brian Jones (21-20). The semi-final between George and Sue was expected to be a close encounter but it was George who established a 12-7 lead with three 2s in the first 8 ends. Sue was not going to give up her hold on The President’s Cup easily, fighting back to close the gap to 14-13, but George was able to reclaim the jack to run out a 21-13 winner.
In the bottom half of the draw, Tony Wellard reached the semi-finals with victories against Alan Bond (21-20), Jim Finnimore (21-14) and Pat Jones (21-20). Tony’s semi-final opponent was to be the winner of the quarter-final between the two rivals from Crossens, Margaret Langley and Mike Dunlop. As with the other quarter-finals, this game could have gone either way, but it was Margaret who edged into the semi-final with a 21-19 win, having had wins against Pat Higgins (21-13) and Irene Nowell (21-15) in the earlier rounds. Despite having to concede a handicap of two against Tony in the semi-final, Magaret was able to claim five 2s to win through to yet another Hesketh Arms final, the winning margin being 21-14.
This was Margaret’s third consecutive final at the Hesketh this season, having been runner-up in the Rose Bowl and a winner (partnering Eileen Rawcliffe) in the Spring Pairs.
It was George, however, who continued the form he had been showing all afternoon and was able run out a comfortable 21-8 winner to claim his first competition win at the Hesketh Arms, having been runner-up in the Championship Cup in 2010 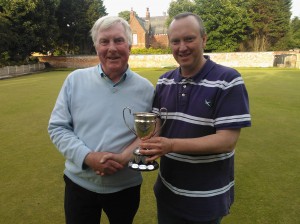 Category: Uncategorized
OPEN DAY ROUND ROBIN
An Open Day Round Robin will be held this Saturday, 9th June, starting at 1.30pm. This event is aimed primarily at members who do not play for our league teams but is open to any non-members who would like to have a go at Crown Green Bowling. Sets of bowls will be available for anyone who does not have their own.
PRESIDENT’S CUP
The next club competition will be the President’s Cup, to be held Sunday 17th June, starting at the usual time of 1.00pm.
GREEN BOOKINGS
Would members please note that the green will be unavailable for use on the following dates due to private bookings :-
Wednesday 13th June – 6.30pm onwards
Sunday 15th July – all day
Category: Uncategorized

In 4th place, with an aggregate of +10, was Eileen Rawcliffe. With a score of +13, Mike Davidson was 3rd. One chalk ahead to claim second prize was runner-up Pat Higgins but the clear winner was Mike Dunlop, who finished on +18.

The final Round Robin scheduled for this season will take place on Monday 27th August, starting at 2.00pm