CHAIRMAN’S SHIELD
A good turnout of 28 players attended the Club on Sunday to compete in the third and final pairs competition of the season, The Chairman’s Shield.
Pairings for the Club’s doubles competitions are drawn at random and two of the strongly fancied pairs faced each other in the quarter-final, Margaret Langley and Ray Sutton eventually overcoming Bill Bloor and Tony Livesey 21-20. In the semi-final, Margaret and Ray went on to meet Eileen Curtis and Richard Rawcliffe, who had won two tricky games against Fred Mitchell and Joe Parker (21-17) and Jim Halsall and Eileen Rawcliffe (21-20). The semi-final was another tight affair with Margaret and Ray just winning 21-18 to reach the final.
The bottom half of the draw saw the very strong pair of Alan Bond and Jim Finnimore win through to the final with wins against Mark Eustace and Dorothy Mitchell, Janice Hobson and John Stennett and in the semi-final, one of last winners, Margaret Eustace and Chris Harding.
The final was expected to a close match and so it proved. Although Alan and Jim counted two at the first end, Ray and Margaret scored 3s at the 2nd and 8th ends and these turned out to be decisive. Holding a lead of 13-12, Ray and Margaret won five consecutive ends to lead 19-12 and although Alan and Jim fought back to close the gap to 18-19, Margaret and Ray were able to clinch victory with a couple of ones. Congratulations to Ray and Margaret, two of the longest serving members of the Club and deserving winners of the 2013 Chairman’s Shield.

The Plate competition was won by Sue Davies and Geoff Rimmer, who defeated Jayne Eustace and George Hitchmough 21-16 in another close final 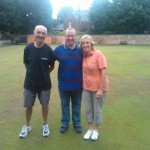 The club raised £127 which will help towards maintaining the green

The raffle was drawn on Sunday at the Chairman’s Shield, and was won by Don Rimmer

We thank NFU Mutual for their kind donation of the tickets

Our congratulations go to Kevin Leddy who reached the final of the Burscough league individual competition.

15 people turn up for the Round Robin on Saturday 13th July.

It was one of the warmest days of the year. Three people sat out leaving 12 to play.

After over 2 hours playing the winners emerged.

Joint first with +13 were David Warrior and Alan Bond

And third was Joan Bond

Thanks to Jim Finniamore and John Stennett for organising the event and everyone who braved the heat to play.

Category: Uncategorized
The Club’s first ever President’s Day was held last Sunday (30th June) and was a great success for the new President, Bill Nowell. The improved weather saw the event attract a record entry for a club singles competition of 37, with a good number of spectators also there to lend their support.
In the top half of the draw, Mark Rowlinson made comfortable progress to the semi-final with wins against Vera Groom (21-11), Jayne Eustace (21-12) and Judith Farrell (21-13). He faced tough opposition in the semi-final in the form of Mike Dunlop who had successfully negotiated three tough games, narrowly defeating Jim Finnimore (21-18), Steve Mann (21-19) and John Stennett (21-17). These close games must have taken their toll on Mike, however, as Mark won through to the final with an easier than expected 21-13 victory.
The bottom half of the draw saw Alex Rimmer reach his second final of the season after a series of closely fought contests. Having defeated Don Rimmer 21-10 in the 1st Round, Alex then had to go the distance against Brian Jones, Leo Tobin and Eagles player John Unsworth, winning all three games 21-20.
In the final, Alex, with an advantage on the handicapping of +4, established an early lead, winning four consecutive ends to lead 11-6. When Alex scored back-to-back 2s at the 16th and 17th ends to take the score to 17-9, it looked to be only a matter of time before he clinched victory. However, Mark was able to take the next four ends to narrow the gap to 15-17 and although Alex scored a couple of singles to go within two chalks of the title, Mark strung another four consecutive ends together to take the 2013 President’s Cup, winning 21-19. 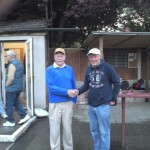 A plate competition was held for those players who had lost their first game and this was won by Bill Nowell who beat Richard Rawcliffe 15-10 in the final. 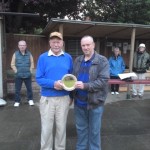 The Committee would like to thank Irene Nowell, Pat Jones and Betty Plant for providing the refreshments and organising a raffle. An impressive total of £143 was raised on the day which will go towards club funds.
Congratulations to our President, Bill Nowell, on a successful and enjoyable day.
Category: Uncategorized
Recent Posts
Archives