SPRING PAIRS 2018
Congratulations to Sue Andersen and Ken Rimmer on winning the Spring Pairs. The Club’s first random doubles of the season took place on Sunday and attracted 18 pairs, a record for this competition. 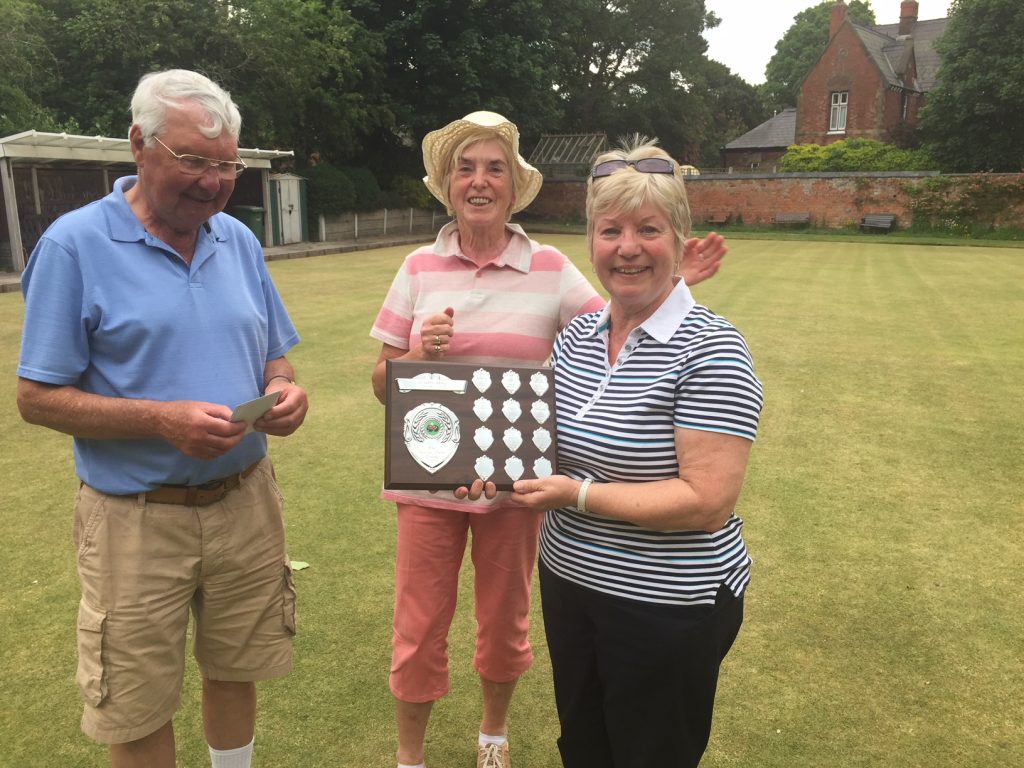 Sue and Ken had to overcome the disadvantage of being drawn in the Preliminary Round but reached the final with wins against Bill Bloor and Eileen Rawcliffe (21-11), Pat Miller and Peter Smith (21-18), Mike Milne and Sue White (21-5) and Laurie Townson and John Unsworth (21-14). Their opponents in the final were Rita Stanley and Fergal Wright, who had made comfortable progress with wins against Barry Pursall and Ray Sutton (21-12), Chris Harding and Bill Nowell (21-12) and Wayne Graham and Leo Tobin (21-9).

The final was a tight affair, with neither pair able to count more than ones or twos for the first 17 ends but having established a 16-12 lead, Rita and Fergal appeared to be favourites. A four for Sue and Ken at the eighteenth end, however, proved to be a turning point and they were able to count at four out of the next five ends to win an excellent final 21-17. 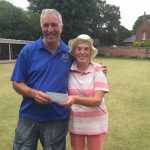 The plate competition was won by Terry Corfield and Dave White with a 15-13 win in the final against Pat McArthur and Richard Rawcliffe. 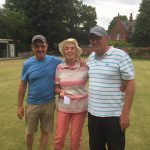 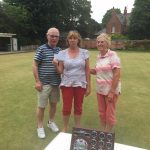 The next club competition will be the Coronation Cup singles handicap, to take place on Sunday 10th June, 12 noon start.

SPRING PAIRS
The next club competition will take place on Sunday 27th May, when we will be competing for the Spring Pairs Trophy. Please arrive by 11.45am for registration to allow for a prompt start at 12 noon. As usual for our doubles events, pairings will be drawn randomly.

NEW HANDICAPPING SYSTEM
From 2007 to the end of the 2017 season, the Club has run 64 competitions for club members. These competitions have produced 49 different winners – who will become the number 50?
During this time, the handicapping system was based on the team that a member played for in the LV League – the Club only had two LV League teams in 2007. As the Club’s membership has grown in the intervening years and the number of teams has increased to eleven across six local leagues, using this as a basis for the handicaps has become unfit for purpose and has resulted in some members being at a disadvantage. Also, some players were being handicapped for winning an event nearly ten years ago. For these reasons, it was felt that it was time to review the system used.
From the beginning of the 2018 season, the handicaps for the Club’s singles competitions will be :-
Ladies, male social bowlers and novices – +6
Male league bowlers – +4
Anyone winning a singles event will be deducted 2 points from their handicap. There will be no lower limit to the handicap but only the previous three seasons and the current season will be taken into account. Hopefully, over time, this will prove to be a fair system and more accurately reflect an individual’s performances.
For the doubles events, all pairs will play of +4. Hopefully, the random draw element will give everyone a fair chance of being successful during the course of the season.

SOUTHPORT FEDERATION
The Southport Federation team got their season underway on Sunday 22nd April when they took on Menai from North Wales.
The home leg took place at Fleetwood Hesketh, with Southport suffering a narrow aggregate loss with six winners to each side. Of the Hesketh Arms representatives there were good wins for Chris Porter (21-14) and Chris Harding (21-20).
Away from home in Caenarfon, there were some creditable performances from the Hesketh players, with narrow defeats for Alistair Adams (20-21) and Danny Harding (19-21). The man of the match for Southport was our new social member, Jason Wright, with an excellent 21-8 win. Overall, Menai won the match by 23 points to 9.
Southport now look forward to their next fixture on Sunday 20th May, when the opponents will be near neighbours Preston. The home leg will take place at the Sphynx, starting at 2.00pm and Alistair Adams, Kez Adams and Fergal Wright have all been selected to represent the Southport home team. Chris Porter and Mark Wilde have been chosen for the away leg at Fox Lane, Leyland. As ever, supporters will be more than welcome for what should be an interesting match.

GREEN BOOKINGS
Please note that the green will be unavailable to members on the following dates due to green bookings.
Sunday 1st July – all day for a private bowling party
Thursday 9th August – all day up until 5.30pm for a bowling party

We apologise for any inconvenience caused.

Social Round Robin held on Sunday 6th May
A total of 18 members turned up on a glorious sunny day to take part in the Social Round Robin.
Following some competitive bowling the Winner with +24 was Wayne Graham, just beating Dave White in 2nd Place with +23.
The other money winners were Ray Sutton (+12) in 3rd Place and Alex Rimmer  (+11) in 4th place.
Thanks to all who took part and the spectators who turned upto enjoy the sun and bowling.

The next competition will be The Spring Pairs on Sunday 27th May commencing at 12.00 noon. Please register by 11.45am 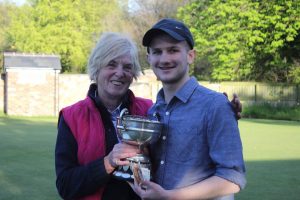 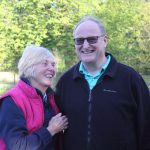 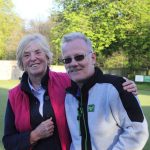 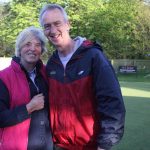 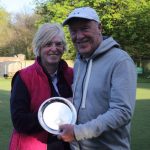 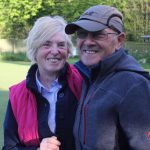 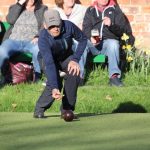 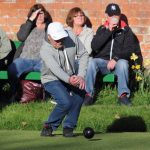 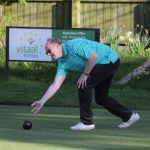 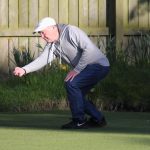 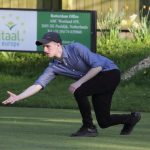 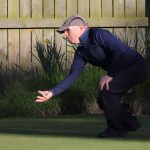 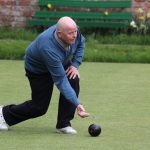 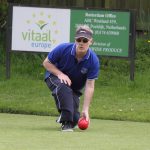 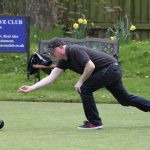 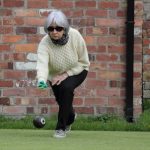 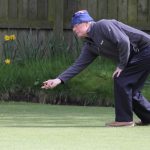 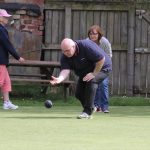 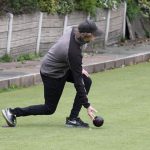 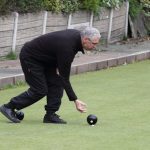 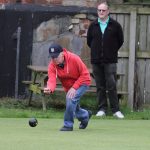 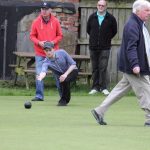 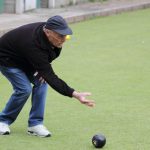 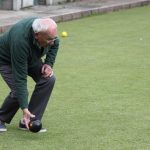 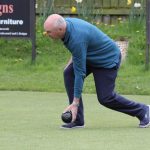 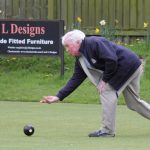 ROSE BOWL 2018
The Club’s programme of internal competitions got off to a good start on
Sunday when 36 members took part in the Rose Bowl singles handicap.
In the top half the draw the holder, Fergal Wright, was drawn in the
Preliminary Round against Derek Wignall and progressed comfortably with a
21-7 win. He then overcame tough opponents in Peter Smith (21-13) and Laurie
Townson (21-13) to set up a quarter final clash with fellow Eagle and
Vulture, Kez Adams. This was expected to be a close game but with both
players playing well, it was Fergal who edged it 21-17 to reach the
semi-final, where he was to face Brian Sutton. This game proved to be
Fergal’s toughest test of the day as Brian, winner of the Coronation Cup in
2016, pushed him all the way, just losing out by a narrow 21-18 margin.
Fergal’s opponent in the final was Bill Bloor, who had got past Wayne Graham
(21-17), Rita Stanley (21-8) and Tony Wakefield (21-12) to reach the
semi-final where he was to play Jason Wright. This was Jason’s first
competition at the Hesketh Arms and he was highly fancied to make it an “all
Wright final” as he defeated Richard Rawcliffe (21-14), Mark Rowlinson
(21-16) and Chris Harding (21-7). It was therefore a surprise that Bill
enjoyed such a convincing 21-8 win to reach his first Hesketh Arms’ singles
final.
With Bill having shown such good form to reach the final, a close game was
expected and it was nip and tuck in the early stages until Fergal settled on
a shorter mark and ran out a 21-14 winner. Congratulations to Fergal on
winning the Rose Bowl for the third time in four years and to Bill for
reaching the final with some good wins along the way.
Under the Club’s newly adopted handicapping system, Fergal will now play off -2 in the next singles event.
Details of the new system will explained in the May Newsletter.

A Plate competition was held for players losing their first game and this
was won by Alex Rimmer who defeated Dave White 15-13 in a closely fought
final.

Don’t Forget we have a Social Round Robin this coming Sunday 6th May 2.00pm start. Please register from 1.45pm