On Sunday 20th May, 28 members and guests took part in the Club’s lateset competition, The Spring Pairs.

In the top half of the draw, Pat Higgins and Sue Davies progressed to the semi-finals with wins against Jim Finnimore and Pat Miller (21-13) and Cath Greenwood and Tony Wellard (21-16). In the semis, they came up against the strong pairing of Sue Andersen and the Captain of the Hesketh Kestrels, Richard Rawcliffe. Both Sue and Richard have been recent winners in the Club’s singles handicaps, so were among the favourites to do well in this competition. However, the pairing of Pat Higgins and Sue Davies had other ideas and established a 17-12 lead with 7 chalks in two ends midway through the game. Richard and Sue Andersen fought back to take the game to 20 across but it was Pat and Sue Davies who took the final end to win through to the final by the narrowest of margins.

The bottom half of the draw saw Mike Dunlop and Joan Wellard reach the semi-finals with wins against Eileen Curtis and Leo Tobin (21-13) and Joan Bond and Don Parish (21-11). In the semis, they were to play Eileen Rawcliffe and Margaret Langley, who had won this competition in 2011 partnering Keith Jones. Although Margaret and Eileen got off to the better start, establishing leads of 11-4, 16-11 and 19-13, Mike and Joan would not give in without a fight and following some extremely close ends, eventually closed the gap to 19-20. Despite such a valient effort, it was Margaret and Eileen who took the vital chalk to progress to the final with a 21-19 win.

Following two closely fought semi-finals, it was fitting that the final should also go to the wire. Neither pairing was able to take a decisive lead and the scores were level at 10 across and then again at 16 across. At this stage it seemed that Margaret and Eileen had broken Pat and Sue’s resistence with a 4 to take a 20-16 lead. However, a four for Pat and Sue at the next end made the scores level at 20-20, but it was Margaret and Eileen who took the deciding end to win the 2012 Spring Pairs final 21-20 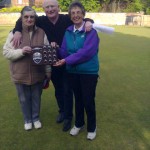 On Saturday 12th May, 12 members and guests took part in the Club’s first Open Day of the season, including several players new to Crown Green Bowls. The event took the form of a Round Robin competition in which the players were split into four groups to play three games of doubles. At the end of the afternoon, the player with the best aggregate score is adjudged to be the winner. In third place, with an aggregate of +8, was Dave White. Brian Sutton was second with +14 but the winner, with a score of +17, was Norma White.

The Club’s Open Days are aimed primarily at club members who do not play for any of our league teams and are also open to anyone wishing to have a go at Crown Green Bowls. The next event will be on Saturday 9th June, starting at 1.30pm. If you are interested in coming along, either come down on the day or, if you would like further information, email the club at hesketharms21@yahoo.co.uk
The club can provide sets of bowls for those who do not have their own set but would like to take part

Despite the inclement weather, the May Bank Holiday Round Robin went ahead as planned. In 2nd place, with an aggregate of +7 was Mike Dunlop but the winner, with a score of +19, was Mike Milne