“Many thanks to all those members and guests who attended the Club’s first ever awards and social evening on Saturday 20th October. Thanks must also go to the Churchtown Conservative Club for the use of their facilities and to Jill and Alan Lloyd for providing the catering.
In addition to presenting prizes for the Club’s competitions, which have been reported on this website throughout the season, awards were also presented to the Merit winners for each of the Club’s teams. These were :-
Eagles (LV Premier Division) – Dave Bannister
Falcons (LV 1st Division) – Bill Nowell
Harriers (LV 2nd Division) – Geoff Rimmer
Ospreys (Burscough 3rd Div) – Neil Coulton
Hawks (Aughton 3rd Division) – Ron Rimmer
Kestrels (Aughton 3rd Division) – Dave Pennington
The awards element of the evening was completed by an announcement by the Club Chairman, Chris Harding, of two new awards. The first award was for the Club’s Team of the Year, which for 2012 went to the Kestrels. This team, captained by Richard Rawcliffe, had an outstanding season, winning the double of 3rd Division Championship and also the 3rd Division mini-league cup. Congratulations to Richard and all his team.
For the final award, Keith Robinson, the Secretary of the Burscough and Lathom Bowling League and a long-standing member of the Club was invited to make the presentation to the Club Member Of The Year. This award was made to Jim Finnimore in recognition of all the voluntary work he has done for the Club over the past few years.
The evening continued with a Raffle, Quiz, Bingo and Pie & Peas supper.
The money raised was in excess of £300 which will be used for maintenance  and repair to the green and surrounds over the Autumn and Winter to ensure the facilities will be up to members expectations for the 2013 season.”
Category: Uncategorized 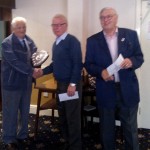 Category: Uncategorized
KESTRELS “STOOP” TO CONQUER.
The Kestrels added to their success in winning Division 3 of the Aughton league by beating Promenade in the final of the Aughton Mini League cup at Aughton Institute on Wednesday 10th October.
The final is decided on the number of wins unless it finishes “five across” and then the aggregate comes into play. Starting with a strong first four yielded three winners and an aggregate lead of forty five. Two winners in the second four put the game beyond the reach of Promenade giving five winners and an unassailable aggregate lead of thirty five with only two games to play.The final two games saw one win and one narrow defeat leave the Kestrels overall winners with six wins and an aggregate margin of plus forty one.
Well done the Kestrels.
Category: Uncategorized
Recent Posts
Archives