Message from the Chairman September 2014

The 2014 bowling season at the Hesketh Arms will officially soon come to the end. The green will be closed on the 1st October as the hard work to prepare for the 2015 season begins. The bowling over the last 6 months has been a very successful and enjoyable time for the club and I would like to take this opportunity to thank all the members for helping us to achieve this.
The annual Awards Night is on October 11th at the Churchtown Conservative Club. There are still tickets available at £5 each which includes refreshments. This is always a fun night so If there is anyone without tickets who would like to attend please phone me or email our secretary.
The final club competition of the season was held towards the end of August and was won by Jim Halsall, with Brian Jones being runner-up. Many thanks to all those who have supported the competitions this season and congratulations to all the successful competitors, who will receive their trophies at the awards night in October.
There are just a few days to go to enter the photo competition. We have had a number of entries but we would like some more. Please email your picture to us before the October 1st.
Watch this space for an exciting November event! Details will be announced at the Awards Night.
If you wish t contact me please phone me on 07761733024 or email secretary@hesketharmsbowlingclub.co.uk
Thank you.
Chris Harding

The Club held it’s final weekend event of the season on Saturday, when 16 members took part in the September Round Robin. After some keenly contested games, Leo Tobin took 4th prize with a score of +9, Alan Bond was 3rd with +11, 3 behind Vera Johnson on +14, but the runaway winner was Joe Parker with an impressive aggregate of +24.

Members are reminded that the green will be closed from Wednesday 1st October, in order that the important end of season maintenance works can be carrried out.

ROUND ROBINS
The final weekend event of the season will take place this Saturday, 20th September, when the Club will hold a Round Robin, starting at 2.00pm.

The Tuesday morning Round Robins (10.00am start) will continue until the end of September and the Officers and Committee of the Club would like to express their thanks to Jim Finnimore, who has done such a good job of running these popular sessions. In addition to providing members with a regular opportunity for social bowling, they have proved to be a useful source of additional income. It is hoped that these sessions will continue next season and all are welcome, regardless of bowling experience or ability.

SOUTHPORT PARKS LEAGUE
Congratulations to Brian Mycock and his Hesketh Kites team on finishing runners-up in the 2nd Division of the Parks League, in only their second season. This team has attracted several new members to the Club and given some members their first taste of league bowling. The team has enjoyed an outstanding season, winning 19 out of their 22 matches and will now be promoted to the 1st Division for the 2015 season.

The Kites’ merit winner was Jim Finnimore, who has had a superb season, winning 20 games out of a possible 22 to claim the Parks League’s 2nd Division merit title. Well done to Jim on an impressive achievement.

The Club’s ambition is to enter a second team into the Southport Parks League. The team would start in the 2nd Division and games are played on a Monday evening. The team would be an ideal starting point for anyone who has not tried league bowling before. Please contact an Officer of the Club as soon as possible if you would like to register your interest or would like more information. 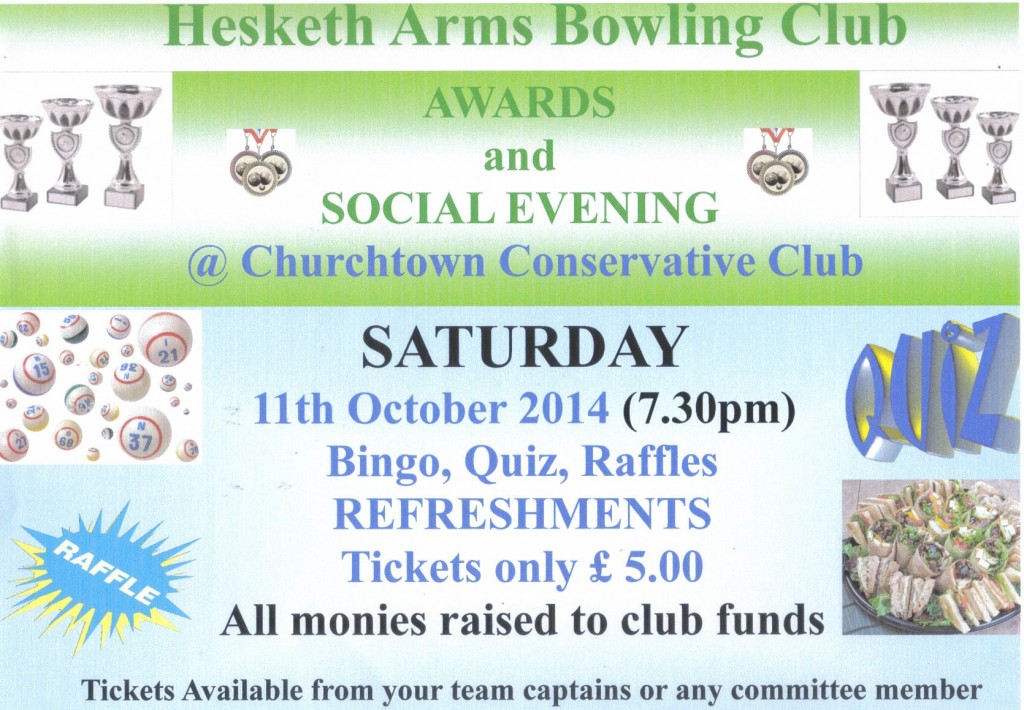 The awards evening is scheduled to take place on Saturday 11th of October at Churchtown Conservative Club.
The presentation of trophies won during the 2014 season, team awards and any special awards will take place.
Refreshments will be provided up to our usual expected standard and a Quiz Bingo and Raffle will be held.
The evening was well supported last year and enjoyed by all.
All funds raised will go towards improving your club.
I hope you can support the event.
Tickets are available from all team captains and any committee member.

Dear Member,
Due to several recent security lapses please can the last person leaving the green check that the club hut, the mower shed and the main gate are securely locked.
Please be vigilant and report anything suspicious immediately to a committee member or your captain.
Thank you
Chris Harding