THE AGM MEETING AGREED TO INCREASE SUBSCRIPTIONS FOR THE 2019 SEASON

SUBS ARE NOW DUE 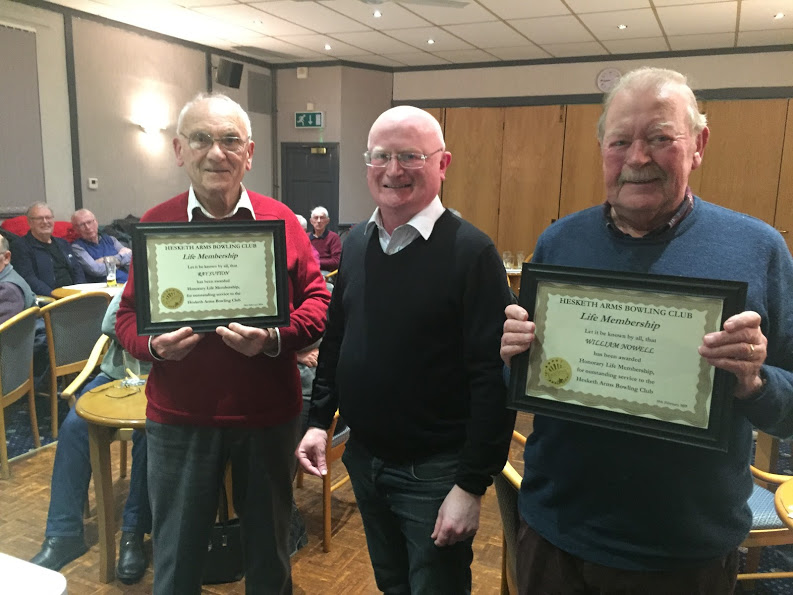 The Club’s seventh annual Awards Evening was held on Saturday at the Churchtown Conservative Club, when members celebrated a successful 2018 season. The evening was again compered by Club Chairman, Chris Harding, who congratulated all the members on another excellent season.

Awards were made to the winners and runners-up of the Club’s nine internal competitions and team merit winners, details of which have been reported during the course of the season and in the 2018 Season Review. These were followed by the Club’s special awards, presented to the Team of the Year and the Club Member of the Year. The team award was again keenly contested, which several of our teams enjoying successful campaigns. The Kites (Parks League), Vultures (Burscough League) and Hawks (Aughton League) all achieved either promotion or knockout cup success but the final choice was between the three teams that had finished as champions of their respective divisions. In the Southport LV League, the Club achieved a notable double, with the Harriers winning the 1st Division and the Eagles finishing as Premier Division champions, the first time this title had been won by the Hesketh Arms in over twenty years. Our third champions were the Owls, who under the captaincy of Sue Davies, won the league and cup double in the Maghull League 4th Division. As several members of the Committee are either captain of one of these teams or play for them, an independent panel was appointed and the 2018 Team of the Year was adjudged to be the Eagles in recognition of winning the LV League Premier Division. The trophy was accepted on the team’s behalf by Chris Harding, who has been captain of this team for nineteen consecutive seasons.

The final presentation of the evening is made to the Club Member Of The Year and this year it was deservedly awarded to George Hitchmough. George has been Club Secretary since 2011 and in addition to the usual duties involved in this role, George has set up and administered the Club’s website, overseen numerous maintenance projects at the green, organised the Club’s social and fundraising events and provided a vital link to the Conservative Club, which we use as the venue for our functions and meetings. George has also been a successful captain of two of our afternoon teams, the Hawks and the Merlins.

The Committee would like to thank the Churchtown Conservative Club for allowing us to use their excellent facilities once again. Thanks in particular to Gill for her hard work on the night and to Brian Whitley, who helped Gill behind the bar and with laying out the buffet.

Many thanks to Jason Chapman and Jon Roberts for their help selling the raffle tickets.

A special mention must go to George Hitchmough for co-ordinating the arrangements for the whole evening and to Sue Andersen, who helped George with the catering.

Finally, thank you to all those who supported the event by attending on the night and providing prizes for the raffle. Final proceeds came to £385.30, which will go towards Club funds.