The Club’s programme of internal competitions was completed at the weekend when 28 members took part in the inaugural staging of the Last Chance Cup. This is an additional random pairs competition, introduced to conclude the season, as a result of requests from members.

It was fitting that this new event produced two first-time winners of Hesketh Arms competitions in Norma White and Wayne Graham, who had played well all afternoon in defeating Jason Chapman and Norman Simpson (21-6), Bill Bloor and Sue Wignall (21-14) and Terry Corfield and John Hughes (21-15) to reach the final. Their opponents in the decider were the strong pairing of Noel Morgans and Tony Wakefield who had a marathon battle in their semi-final before overcoming Jim Halsall and Lynne Smith 21-20.

In the final, Norma and Wayne got off to a flying start with a three at the first end and were never behind as they established a 20-13 lead. Despite a three for Noel and Tony at the 20th end to close the gap to 16-20, Norma and Wayne were able to score the single chalk required to become the first winners of the Last Chance Cup 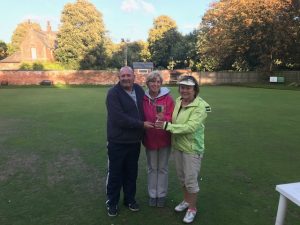 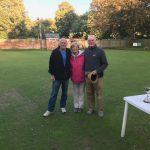 The Plate competition for first round losers was won by Mike Milne and Bill Nowell with a 15-10 win in the final against Sue Andersen and Pat Miller. 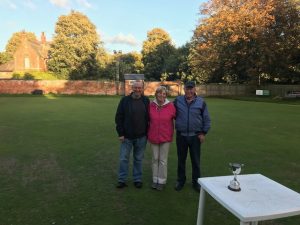 THE GREEN WILL CLOSE FOR WINTER ON THE 2nd OF OCTOBER
WORKING PARTIES MAY BE REQUIRED DURING THE CLOSE SEASON. 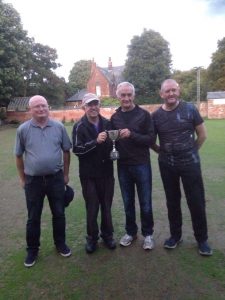 Congratulations to John Clark and Barry Davis of Formby Our Lady’s on winning the Bernard O’Malley Trophy. This is the first time the Club has run an Open Doubles and the competition attracted a good mix of Club members, local bowlers, as well as several pairs from further afield. Having overcome some strong pairs to reach the final, John and Barry were to face the home pairing of Chris Harding and Jon Roberts. Chris and Jon had also taken some notable scalps on their way to the final, including Steve McCall and Neil Rigden of New Longton in the semi-final.

The final was a close affair, with only one score of more than two being achieved in the match and Chris and Jon started well to lead at 10-7 and 14-12. However, Barry and John had played consistently well all day and with John finding some crucial final bowls to deny the homesters, the Formby pair were able to count at five out of the last six ends to win the game 21-15. All the finalists played well in what was a fitting finale to an excellent day’s bowling.

Many thanks to all those who supported this event, which is held to acknowledge the contribution to the Club of our Honorary Vice-President, Mr. Bernard O’Malley. The help of members with marking, measuring, making teas and coffees all helped to make the day run smoothly and this is greatly appreciated.

The final event of the season will be on Sunday, 23rd September when a new random doubles, The Last Chance Cup, will take place, starting at 12 noon. Please report by 11.45 am to allow a prompt start.

This completes a League and Cup double for the team who were confirmed as League Champions some 2 weeks ago.

Congratulations to captain Sue Davies and all the team members. 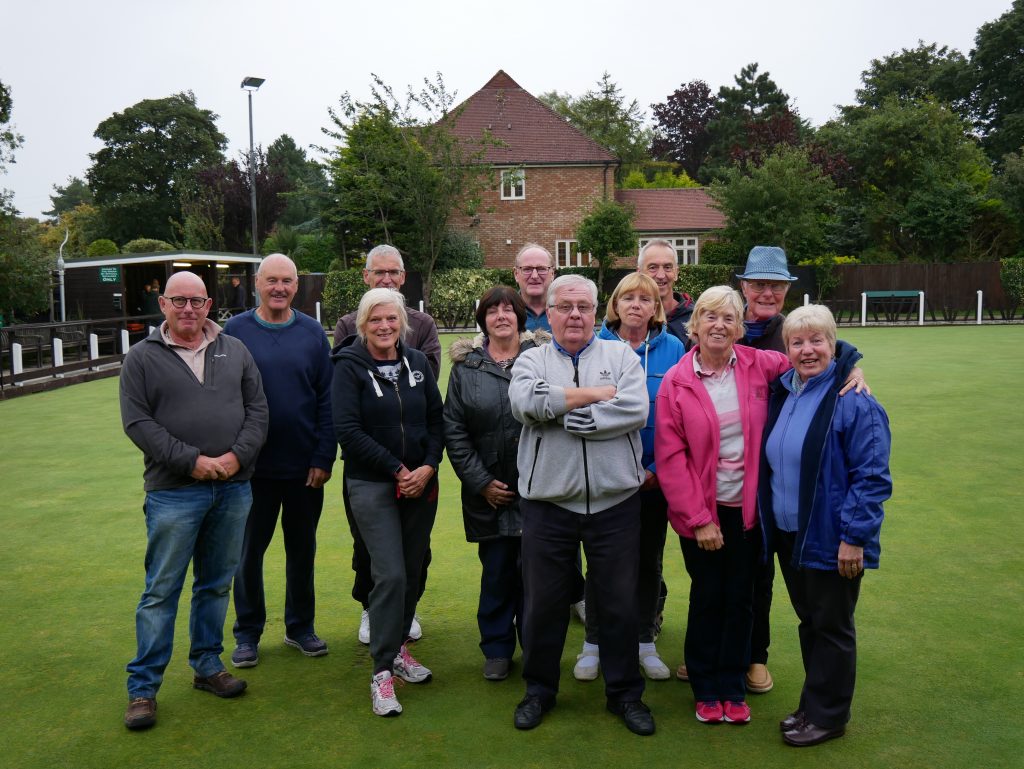 Despite poor weather conditions, the Club’s latest competitions went ahead on Saturday when members competed for the Championship Cup and, for the first time, the Ladies’ Championship.
The Ladies Championship final was between our Club President, Sue Davies and Janice Hobson, both successful players in our Maghull League team on a Monday night. Sue started very strongly in this final and at 16-9 up looked to be heading for a comfortable victory. Janice had other ideas, however, and helped by 4 twos in five ends took the lead at 18-17 before Sue was able to score the chalks needed to win an excellent final 21-19. 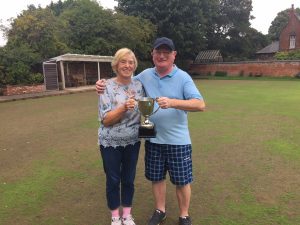 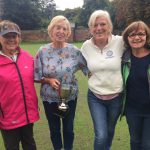 The Championship Cup final was between Chris Harding and Dave Bedford, both previously runners-up in Hesketh Arms Club singles competitions. It was Chris who started strongly in the final, winning nine out of the first eleven ends to establish a 13-7 lead. Despite counting four 2s in the game, Dave was never able to close the gap and Chris eventually won the final 21-16 to claim his first club competition win at the Hesketh Arms. 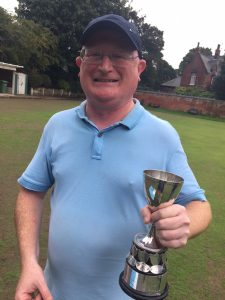 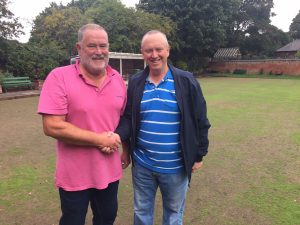 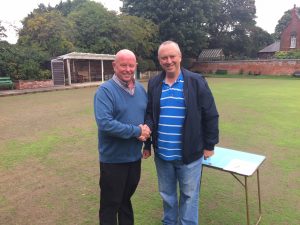 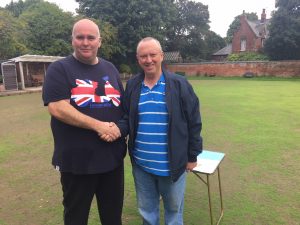 Next Sunday, 16th September, the Club is hosting it’s first Open Doubles. Play starts at 10.00am and spectators will be very welcome.

Members are reminded that the next club competition will be take place next Saturday, 8th September, when members will compete for the Championship Cup (men’s singles) and for the first time, the Ladies’ Championship. The competitions will run simultaneously with a joint plate competition for those who lose their first game.

This season, the Club is holding an Open Doubles competition for the first time, with the winners receiving the Bernard O’Malley Honorary Vice-President’s Trophy. This will take place on Sunday 16th September and has attracted a good field of bowlers, both local and from throughout the North West.

Spectators on the day will be very welcome, along with any help with marking and measuring for what should be a very entertaining day of quality bowling. Play will start at 10.00 am.

The Club has achieved a double success in the Southport LV League with the Eagles winning the Premier Division and the Harriers finishing as champions of the 1stDivision under new captain Jason Chapman. Congratulations to Peter Croston of the Harriers, who won the 1st Division merit with an outstanding record of 15 wins out of 16 games played. 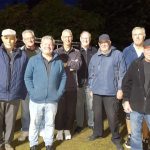 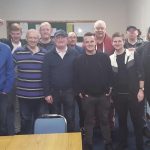 Congratulations to captain Sue Davies and all the Hesketh Owls on winning the 4th Division of the Maghull Bowling League. They deservedly clinched the title with a 6-4 win over second placed Ormskirk Bowling Club in their final fixture.

The Southport Federation team completed the 2018 league programme with a resounding 10-2 victory in the home leg of their fixture against Ormskirk ‘A’, held at the Hesketh Arms. Among the highlights were notable wins for Hesketh Arms’ representatives Chris Porter (21-14) and Fergal Wright (21-5).

The overall result of 21-11 in favour of the Southport team ensured a third place finish in their division, just six points behind second placed Preston. It also qualifies the team for the Federation Knockout Cup, to be held in Cheshire at the beginning of September.

Thanks are due to the Hesketh Arms’ Committee, Graham Meadow (greenkeeper) and members for their co-operation and assistance in the hosting of this fixture.