AUGHTON LEAGUE
The Club continued to run two teams in this men’s Wednesday afternoon league and they were once again captained by Richard Rawcliffe and George Hitchmough.

Having achieved promotion from the 2nd Division as 2016 champions, the Kestrels were competing in the strong 1st Division for the 2017 season and wins proved hard to come by. Despite some good results towards the end of the campaign, the team finished in 8th position. Next season the team will be looking to bounce back to the top division at the first attempt.

SOUTHPORT AND DISTRICT MEN’S VETERANS LEAGUE
Following a successful 2016 season, which saw the Merlins gain promotion to the 2nd Division of the Southport Men’s Veterans’ League, the Club was pleased to enter a second team into this Monday afternoon league due to the number of members wishing to play.

The new team, named the Hobbies, was ably captained by Roger Van Beever and it is pleasing note, included several players new to league bowling, along with one or two more experienced campaigners. The Hobbies enjoyed a fantastic season, winning sixteen out of their 22 league games to take the 2nd Division Championship by six points from 2nd placed Sandbrook Park. In addition, the team won the Joe Bond Trophy to achieve the league and cup double.
The Merlins, captained again by George Hitchmough, also performed well in the 2nd Division, winning 13 games to finish in 4th place. This is a great effort in their first season at a higher level.

Our two Vets teams can now look forward to their ‘derby’ games in 2018!

MAGHULL BOWLING LEAGUE
In 2016 our team in the Maghull League finished 3rd, just six points short of a promotion place and enjoyed another good season in 2017.
Captained again by Sue Davies, the team finished just five points behind of 2nd placed Meadows 1, this time finishing 4th. It is surely only a matter of time before this team gains promotion to the 3rd Division.
The team merit was closely fought with Jeff Brown and Pat McArthur winning 11 games, but the winner, with 12 wins out of 14 played, was Jim Halsall.

CLUB COMPETITIONS
The Committee has again organised a programme of club competitions during the 2017 season. These have been well-supported and proved to be very enjoyable afternoons.

OTHER EVENTS
FRIENDLY V. EMMANUEL B.C.
In August, we welcomed a team from Emmanuel Bowling Club for the third annual friendly fixture. The Challenge Shield was retained by the Hesketh Arms team, the winning margin being 9-4.

BERNARD O’MALLEY
HONOUARY VICE-PRESIDENT’S TROPHY – JUNIOR OPEN SINGLES
This event was staged for the third time at the beginning of September and was won by Kyle Dawes, who defeated Matty Greenwood from Mere Brow 21-18 in a high quality final

MEMBERSHIP
It is pleasing to report that the Club continues to attract interest from new and experienced bowlers alike, with our membership currently standing at 149. This is made up of :-
Full Members – 80
Social Members – 67
Junior Members – 2
New members are still welcome to join for the 2018 season. Please refer anyone interested to an Officer of the Club.

Congratulations to the Vultures, who have won the Burscough League Knockout Trophy, defeating Division 1 Champions Burscough RBL ‘A’ by 15 chalks at Tarleton Bowling Club. 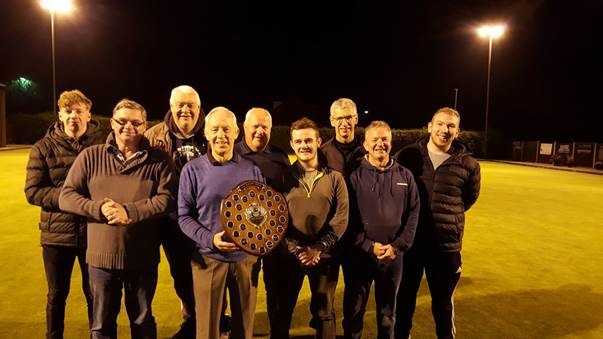 To win the Knockout Trophy, they also overcame the teams finishing 2nd and 3rd in the top division, Banks St.Stephen’s and Bretherton and it rounds off a tremendous first season for the team, captained by Chris Harding. The success completed an unprecedented treble for the Vultures, as they had previously won the 3rd Division Championship with a 100% winning record, along with the 3rd Division Cup.

The Championship Cup, which was interrupted by torrential rain in August, was completed on the final weekend of the season. The winner was Ken Rimmer, who defeated George Hitchmough in the final. The losing semi-finalists were Sue Davies and Kevin McCormack. This is Ken’s first singles win at the Hesketh, having previously won the Spring Pairs.

Although the Hesketh Arms green is now closed to allow for maintenance work to take place, we have been informed that there will be winter bowling available at Botanic Gardens B.C.

Work is currently being carried out on the “winter” green but it will re-open on Monday 6th November. Non-members will be able to play on the green on payment of a £10 fee, which will cover the period from 6th November 2017 to 31st March 2018. A member of Botanic Gardens B.C. will be present at the green on Tuesdays, Wednesdays and Thursdays between 11.30am and 2.30pm (commencing Tuesday 7th November) and the fee can be paid at these times.

From Saturday 11th November, a weekly Round Robin will be organised (start time 11.00am). There will be an entry fee of £2.00 to play and this will include tea / coffee and biscuits.

DATES FOR YOUR DIARY