The Club’s latest competition was held on Saturday when members played for the Chairman’s Shield. This is a random pairs, with pairings drawn on the day.

In the top half of the draw, Jim Halsall and Pat McArthur, both previous winners of doubles titles at the Hesketh Arms, were drawn to play together. They proved to be a formidable pairing as they reached the final with wins against Chris Harding and Lynne Smith (21-9), Sue Davies and Mark Rowlinson (21-19) and Mike Dunlop and Norman Simpson (21-14).

Their opponents in the final were Dave Bedford and Terry Corfield, who had overcome Alex Rimmer and Peter Smith (21-20) and Ken Rimmer and Sue White (21-13). Jim and Pat dominated the early stages of the final winning 6 out of the first 8 ends, including two 4s, to establish a 16-6 lead. Although Dave and Terry counted three at the 12th end to close the gap to 11-19, a double at the next end saw Jim and Pat clinch the title with a 21-11 win. 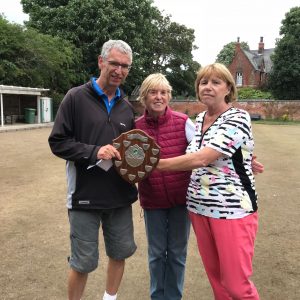 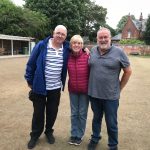 A plate competition was held and this was won by Mike Burrill and Fergal Wright with a 15-4 win against Alex Rimmer and Peter Smith in the final. 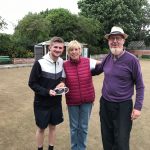 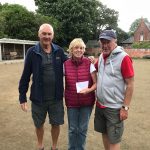 Members are reminded that the next event will be the President’s Day, this coming Sunday 5th August (12 noon start). As well as the main competition and plate, light refreshments will be available and a raffle will be held. Any donations of prizes will be very welcome. We hope to see to a good turnout to support Sue Davies in her first year as Club President. 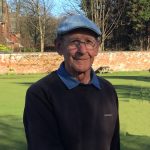 We have to announce the sad news that Jim Finnimore died on Friday 13th of July.
Jim was an Honorary Life Member of the Hesketh Arms Bowling Club.
Jim was the instigator and organiser of the very successful mid week social round robins which were enjoyed by many social and team bowlers. Jim was also very involved in the general maintenance and improvement of our club and gave many hours of his time ensuring the gardens and surrounds were kept in good order. Jim will be missed by all members of the bowling fraternity in and around Southport. We have passed on our deepest condolences to Jim’s family

The funeral arrangements for Jim Finnimore are as follows:-
Southport Crematorium Tuesday 31st of July at 2.00pm.

The family would welcome all friends to meet afterwards at the Churchtown Conservative Club, St Cuthbert’s Road, Churchtown. PR9 7NN

The family have requested that it should be Family flowers only and any donations would be welcomed in respect of Queenscourt Hospice.

Congratulations to Sue Andersen and Mike Milne on winning the Vice-Presidents Pairs Trophy on Saturday. They overcame Jason Chapman and Ken Rimmer in the final, coming from 19-14 down to score a four and three at the last two ends to claim the trophy. This was Sue’s second Hesketh Arms competition win of the season, having won the Spring Pairs with Ken back in May. 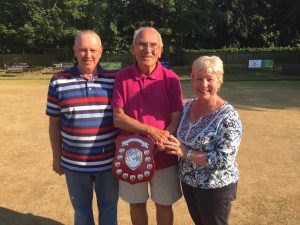 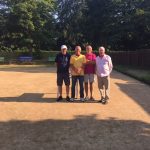 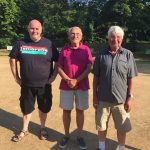 In another close final, the Plate was won by Bill Bloor and Dave White, who defeated Chris Harding and Sue White by the narrowest of 21-20 margins. 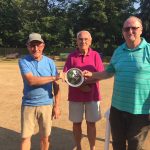 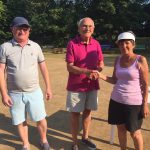 Members are reminded that the President’s Cup, originally scheduled for July, will now be held on Sunday 5th August.

Before that, though, we will be playing for the Chairman’s Shield on Saturday 28th July. This will be a random pairs, starting at 12 noon.

HESKETH ARMS BOWLING CLUB
JULY – SEPTEMBER 2018
Although the 2018 season has now passed the half way mark, there is still plenty of bowling to look forward to in the final months of the season.
On Saturday 28th July, we will be holding the Chairman’s Shield. This will be a random pairs, starting at 12 noon.
Below are details of events planned for August and September. Please note that the President’s Cup, originally scheduled for July, has been re-arranged for Sunday 5th August, again starting at 12 noon. This has been changed to avoid clashing with the FIFA World Cup.
Anyone interested in playing in the friendly fixture away at Emmanuel on Saturday 11thAugust should email Mike Milne ( michaelmilne66@outlook.com ) or write their name on the list in the Clubhouse.
Two new club competitions are being introduced this season. On Saturday 8thSeptember, the Ladies Championship will be take place alongside the Championship Cup (men only). We hope that as many ladies as possible will support this new venture.
The season will conclude with a new random pairs, The Last Chance Cup, which will take place on Sunday 23rd September, with a 12 noon start.