Well done to Captain John Unsworth and his team on beating Crowlands in a very close game. 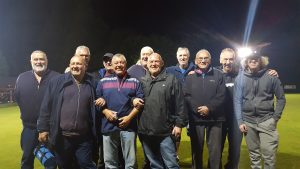 The green is now closed to allow for essential maintenance work to take place and will re-open next Spring in readiness for the 2019 season. Thanks are particularly due this year to Graham Meadow who has had to cope with unhelpful weather conditions both before and during the season. Bearing this in mind, the green has been in excellent condition and has provided a good, if at times challenging, surface to bowl on.

Many thanks to Peter and Lynne Smith for again hosting and organising the popular Tuesday and Friday Round Robins throughout the 2018 season. Thanks also to anyone who helped in any way. The midweek Round Robins are an integral part of the Club’s programme and provide social bowling for new and experienced bowlers alike. The long spell of good weather this Summer has meant an increase in the number of members taking part and at the time of writing a total sum approaching £550.00 has been raised through these events, which is a very useful source of additional revenue for the Club.

2018 has been another successful year for our league teams. Congratulations to the captains and players of the following teams :-

The Southport Federation ended the season by taking part in the Team Knockout Cup, which was hosted this year by Mid Cheshire. The Hesketh Arms was represented by Kez Adams, Chris Porter, Mark Wilde and Fergal Wright, with Mike Milne and Jon Roberts also in attendance to lend support.

The first game took place at Owley Wood in Weaverham, where the opponents were Leeds ‘A’, who had finished in 2nd place in the National League 1st Division. Despite some good performances, this game was lost 6-2 with Kez Adams winning the sweep with an excellent 21-10 win.

Defeat in the 1st Round of the main competition saw the team go into the Supplementary, where they played Cheshire Parks at Davenham Bowling Club. This time it was Southport that ran out 6-2 winners, with wins for Fergal Wright (21-17), Kez Adams (21-14) and Chris Porter (21-18), putting the team into the Supplementary semi-finals.

The next game took place at Castle Private Bowling Club in Northwich and there was more tough opposition in the form of Airedale ‘A’, who have just achieved promotion to the top flight of the National League. Southport got off to a great start, however, with further wins for Fergal (21-3), Kez (21-14) and Chris (21-20). Unfortunately, the second half of the game saw the Airedale side fight back to draw match 4-4 and go through by a single chalk. Nevertheless, this was an excellent effort by the Southport players and bodes well for the 2019 season.

This season, the Club has again held a full programme of internal competitions for members, including two new events – the Ladies’ Championship and the Last Chance Cup. These were introduced following feedback received at the end of last season.

The competitions were again well-supported, despite at times some difficult weather conditions. In total, there were 217 entries and the Committee thank all those who took part for their continued support.

Interest in the Club has remained strong in 2018 and we have ended the season with 140 subscribing members. This is made up of 77 full members and 63 social / junior members.

The Awards Evening and Annual General Meeting will be held early in 2019. Members will be notified and details posted on our website when the dates have been confirmed.