GREEN CLOSURE
Please note that the green will be closed from Monday 2nd October in order that the essential end-of-season maintenance work can be carried out.
MIDWEEK ROUND ROBINS
The Officers and Committee of the Club would like to thank Peter and Lynne Smith for all the work they have undertaken this season in running the Tuesday and Friday Round Robins.
Peter and Lynne have asked that a special mention must also go to those members who have provided help at the round robins with tasks such as putting out chairs, making tea and washing up. This is greatly appreciated.
As well as providing our members with regular social bowling, the round robins bring in additional revenue for the Club, with over £400 having been raised so far this season. We would also like to thank those players who have donated their winnings from the round robins which has helped to boost this total.
LEAGUE TEAMS – A SUCCESSFUL SEASON
It is pleasing to report that the Club’s league teams have enjoyed a successful season. The following league and cup successes have been achieved by our teams. Congratulations to all those involved.
Eagles – Southport LV League Premier Division Runners-Up
Falcons – Southport LV League 1st Division Champions
Vultures – Burscough League 3rd Division Champions and Divisonal Cup winners
Hawks – Aughton League 3rd Division Champions and Divisional Cup winners
Hobbies – Southport Vets League 3rd Division Champions and Joe Bond Trophy winners
Maghull – Maghull League 4th Divison Cup runners-up

SOUTHPORT FEDERATION
The Southport team competed in the Federation Knockout Cup for the first time, which was held at various greens in the Huddersfield area at the beginning of September.
The first round saw the team overcome Cheshire Parks on aggregate, with Mike Milne and Fergal Wright both winning their games. This took the team into the quarter-finals, where they faced tough opposition in the form of 1st Division Champions Barnsley. Despite some good performances, Barnsley won this game 7-1 and they went on to finish runners-up to hosts Colne Valley in the final.
CHURCHTOWN CONSERVATIVE CLUB
At the beginning of September, the Churchtown Conservative Club used the Hesketh Arms green to hold their annual competition, playing for the B.J.P.O’Malley President’s Trophy.
Congratulations to Chris Harding and John McCabe who claimed the title with a 21-10 win in the final against Terry Corfield and Alex Rimmer 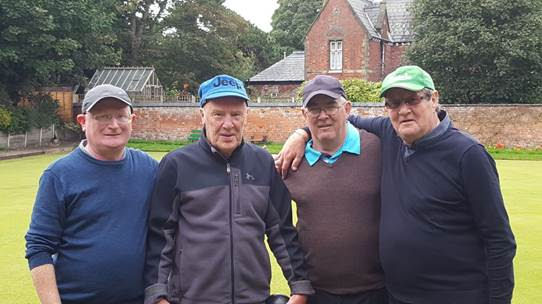 Congratulations to Hesketh Hawks on winning the Aughton League 3rd Division cup for the second year in a row.

7 good wins but the performance of the day was by Laurie Townson, winning 21:20 from being 20:11 down

The team completed the double having already won the league.

Saturday 2nd September saw the third staging of the Bernard O’Malley Vice-President’s Trophy which is an open competition for bowlers aged 18 and under.

This year, a change in format meant that the early stages were run as a round robin to ensure that all the players got a full afternoon of bowling. The top four then qualified for the semi-finals and these were Kyle Dawes and Fergal Wright from the host club, Matty Greenwood (Mere Brow) and Harvey Stansfield from Singleton Bowling Club. All four semi-finalists are junior county bowlers which ensured an extremely high standard of play.

The first semi-final saw the two Hesketh Arms players playing each other, in a repeat of last year’s final but on this occasion it was Kyle who gained revenge by winning on a last end decider to go through 21-20. His opponent in the final was Matty Greenwood from Mere Brow, who had recovered from 9-2 down to win 21-15 against Harvey Stansfield, the scores having been level at 15-15. The final was another high quality encounter which could have gone either way but it Kyle Dawes who deservedly took the title with a narrow 21-18 victory.

Many thanks to the Committee of the Hesketh Arms Bowling Club for allowing us to run this event, which is held in the name of our Honorary Vice-President, Bernard O’Malley, who has provided greatly appreciated support to our Club over a number of years.

A special mention must be made of Graham Pickavance, our referee for the day, who once again gave his time freely to ensure that the competition ran smoothly. Thanks also to those who came down to watch the bowling and helped out with marking and measuring and lastly to the bowlers who took part and provided a memorable and entertaining tournament.