SOUTHPORT LV LEAGUE
Congratulations to Bob Staveley and the Hesketh Falcons on winning the 2nd Division Championship of the LV League.
Category: Uncategorized
AUGUST ROUND ROBIN
The final weekend Round Robin of the season was held on a warm and sunny Bank Holiday Monday, with 20 members taking part.  In 4th place, with an aggregate of +10 was Mark Eustace. Richard Rawcliffe was 3rd with +12. The runner-up, with a score of +16 was Club President Bill Nowell but the winner was Mike Dunlop with +18. 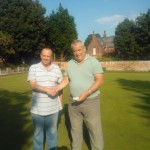 Many thanks to all those who have supported the Round Robins this season. Please remember that the Tuesday morning Round Robins will continue until the green is closed for maintenance work towards the end of September. The Committee would like to thank Jim Finnimore for his efforts in organising the midweek Round Robins this season which have been a popular addition to the Club’s programme of events.
Category: Uncategorized
CHAMPIONSHIP CUP
The final club competition took place last Sunday and 24 members competed for the Championship Cup. This was a decent turnout considering that a number of regulars were involved in the Southport Flower Show events.
It was pleasing to see several members playing in their first club competition and it was of our newer members, Brian Sutton, who reached the final in the top half of the draw. Brian, who has this season played for the Club’s two new teams in the Southport Parks and Veterans Leagues, had a tough route to the final. Three of Brian’s games were won by a narrow 21-19 margin, these being against Graham Meadow, Tony Wellard and, in the semi-final, Ray Sutton.
The bottom half of the draw saw Kevin Leddy drawn to play Fergal Wright in the 1st Round. Fergal has recently joined the Club to play for the Eagles in the LV Premier Division and was expected to provide tough opposition for Kevin. However, Kevin’s experience and greater knowledge of the Hesketh Arms green proved decisive on this occasion and he progressed to the quarter-finals with a 21-11 win. This was followed up with wins against John Catherall (21-12) and Bill Nowell (21-17).
In the final, Kevin had to concede a handicap of 4 and when Brian won the first two ends to lead 7-0, it looked as though Brian might be a difficult opponent to overcome. Kevin then struck form though and won 8 out of the next 9 ends to edge ahead 9-8. Although Brian was able to score a single to draw level at 9-9, Kevin was able to win another eight ends, including 4 2s to run out an impressive 21-9 winner. Congratulations to Kevin and well done also to Brian, who has enjoyed a successful first season of league bowling.

Brian Sutton Runner Up Championship Cup 2013
A consolation plate competition was run for those unlucky enough to lose their first game and this was won by Fergal Wright, who defeated Ted Moule 21-19 in an excellent game which would have been a worthy final of the main event.
Many thanks to all those members who have participated in the club competitions this season.
Please remember that there will be a Round Robin at the club on Bank Holiday Monday 26th August, starting at 2.00pm.
Category: Uncategorized
Recent Posts
Archives