VICE-PRESIDENTS PAIRS TROPHY 2016
At the weekend, an excellent turnout of 32 members took part in the Vice-Presidents Pairs Trophy, the Club’s second doubles competition of the season. The 32 players were drawn randomly into 16 pairs and this produced some strong partnerships.
In the top half of the draw, one of last season’s winning pair, Fergal Wright, was drawn to play with four time Hesketh Arms doubles champion, Margaret Langley. This looked a strong pairing on paper and so it proved as they progressed to the final with wins against Wayne Graham and Noel Morgans (21-16), Jason Chapman and Kyle Dawes (21-3) and in the semi-final, Jim Finnimore and Pat McArthur (21-9).

The bottom half of the draw featured some close games before Laurie Townson and Brian Sutton were able to reach the final with wins against Dave Bedford and Lieny Platt (21-12), Bob Platt and Tony Wakefield (21-15) and Alex and Ken Rimmer (21-18). The highlight of Brian and Laurie’s run to the final was the semi-final against Alex and Ken Rimmer, which saw them run out from 18-10 down.

In the final, Margaret and Fergal got off to a flying start, scoring four at the first end. Although Brian and Laurie drew level at 7 across with three at the fourth end, Margaret and Fergal were able to score consistently and when they got a second four at the 11th end to lead 18-9, it looked as though they were going to win the game comfortably. Brian and Laurie were not going to concede the game without a fight, however and by winning five out of the next seven ends, they were able to close the gap to 16-20 before Margaret and Fergal secured the single they required to claim the title.

Congratulations to Fergal on retaining this title and to Margaret on winning a record fifth doubles title at the Hesketh Arms, having won the Chairman’s Shield in 2008 and 2013 and the Spring Pairs in 2011 and 2012. Well done also to Brian and Laurie on reaching the final and providing a fitting end to the competition. 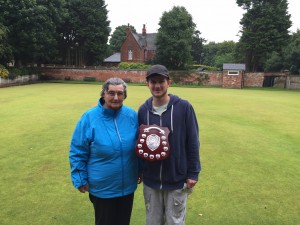 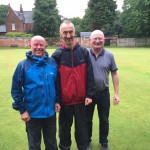 A plate competition was also held and this was won by George Hitchmough and Roger Van Beever with a 15-10 win in the final against Lieny Platt and Dave Stringfellow. 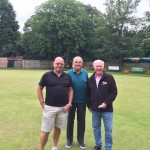 Sunday saw the Club host it’s first Open Singles competition and congratulations go to one of our own members, John Hughes, on being the winner of the inaugural event.

It was pleasing to be able to fill the 32 available places in the competition, which attracted entries from Liverpool, Hoylake, Broughton, Leyland, Kirkham and St.Annes, as well as good representation from local clubs.

John Hughes had started his progress to the final with a potentially difficult tie against Darren Evans from the Brooke Hotel but John won this game surprisingly comfortably, the score being 21-9. This was followed by John’s toughest game of the day against Jimmy Alty from Fleetwood Hesketh which he eventually won 21-19, having trailed 11-7 and 16-12. Having survived this close call, John was able to reach the final with wins against David Bradshaw from Croston Subs 21-13 and John Greenwood of Holmeswood 21-10 in the semi-final. John Greenwood had taken some notable scalps on his way to the last four, overcoming Roy Webster (21-19), Simon Thistlethwaite (21-18) and Steve Wilson (21-13).

In the other half of the draw, Andy Fleming from Kirkham Cons had started with a narrow 21-17 win against local player Bill Hefferan and followed this by defeating Thomas Lowndes from the Broughton and Bretton B.C. In the last eight, Andy faced tough opposition in Andy Draper from nearby Banks St.Stephen’s but was able to run out from 15-14 down to reach the semi-final. Andy’s semi-final opponent was another local player, Bill Roddan, from the Zetland Hotel.
It was Bill who was ahead all the way, leading 14-10 and 18-14 but Andy stayed in touch to eventually win 21-20.

In the final, John Hughes from the host club started strongly, winning 7 out of the first 9 ends to establish a 9-2 lead and although Andy fought back to narrow the gap to 9-14, john was able to use his knowledge of the green to maintain his advantage and eventually take the title, the winning score being 21-10.

At the end of the competition, the prizes were presented by Club Chairman Chris Harding, who thanked the Committee and members of the Club for supporting the first Hesketh Arms Open Singles. He particularly thanked all those who had helped out on the day with measuring and selling a football card to raise funds for the club. These included Jim Finnimore, George Hitchmough, Bill Nowell and Jon Roberts. He also thanked those who had helped with the refreshments, in particular Pat Southworth for providing homemade cakes.

The Hesketh Arms Bowling Club would like to thank all the bowlers who supported this event, especially those who had travelled some distance to take part. We hope they enjoyed their day in Churchtown and look forward to welcoming them back for future events. 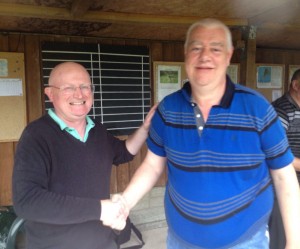 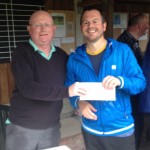 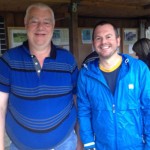 The Club’s June Round Robin was held on Saturday and was won by Steve Lomas with an aggregate of +15. Mike Dunlop was in second place, just three points behind on +12 and third prize went to Ken Rimmer with a score of +2.

Members are reminded that the next event in the Club’s busy season will take place this Saturday and will be a random pairs competition for the Vice-President’s Pairs Trophy. Please report to the green by 11.45am for a 12 noon start.

Category: Uncategorized
LATEST NEWS AND FORTHCOMING EVENTS
ROUND ROBIN – SATURDAY 18th JUNE
Members are reminded that the next club event will be a Round Robin, which will take place this Saturday 18th June, starting at 2.00pm.
OPEN SINGLES – SUNDAY 19th JUNE
On Sunday, we will be hosting our first Open Singles, starting at 10.00am. This competition has attracted a full entry of 32 players, coming from as far afield as Hoylake, Warrington, Leyland, Kirkham and St.Annes. It would be appreciated if members were able to support this event as help will be required on the day with marking, measuring and providing hospitality for our visitors. A good day’s bowling is in prospect as the 32 battle it out for the first prize of £120.00.
SOUTHPORT LV LEAGUE PRESIDENT’S DAY
The Southport LV League is to hold it’s President’s Day at Scarisbrick Bowling Club (Falkland Road) on Saturday 9th July, starting at 10.00am. Our three LV League teams are invited to send two representatives each and anyone interested should speak to their captain or any officer of the club as soon as possible. Food will be provided on the day and it would be good to see the Hesketh Arms BC fully represented at this event.
BURSCOUGH LEAGUE COMPETITIONS
The Burscough League is seeking entries for the following league competitions. Anyone interested should speak to their captain or any club officer as soon as possible.
UNDER-18 MERIT COMPETITION – to be held on Sunday 28th August at the Zetland Hotel, 1pm start.
STEVE RIMMER SINGLES – to be held on Fridays 30th September and 7th October, 6.30pm start.
LEAGUE PAIRS COMPETITION – to be held on Fridays 23rd September and 14th October, 6.30pm start.
Category: Uncategorized

CORONATION CUP 2016
Despite the unseasonal showers, a good turnout of 26 club members participated in the Coronation Cup on Sunday.
The top half of the draw saw Rita Stanley in fine form. Having overcome Alex Rimmer 21-11 in the 1st Round, Rita produced three excellent performances to reach the final by defeating strong players in Tony Wakefield (21-9), Richard Rawcliffe (21-16) and Jim Halsall (21-12).
Rita’s final opponent was to be Brian Sutton. Having beaten Steve Lomas (21-18) and Jim Finnimore (21-19) to reach the semi-final, Brian faced tough opposition in Sue Davies, who had progressed with good wins against Bill Nowell (21-15) and Wayne Graham (21-17). This semi-final proved to one of the games of the day and when Sue led 17-11 after 14 ends it looked likely that we would see two ladies contesting the final of a Hesketh singles competition for the first time. Brian had other ideas, however and produced fives 2s in six ends to book his place in the final with a 21-18 success.
Brian had to concede a handicap of 2 against Rita but was able to wipe this deficit out with singles at the first two ends. Although Rita won the third end, Brian proceeded to count at five out of the next six ends to take the lead at 12-8. Although Rita won the next two ends to close the gap to 11-12, Brian retained the form he had shown all day to win the next 7 ends. This was enough to secure the 2016 Coronation Cup, the final score being 21-11. This was third time lucky for Brian as he had previously lost in the Championship Cup finals of 2013 and 2015. Congratulations to both finalists for good performances throughout the day. 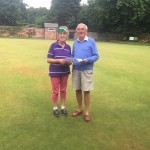 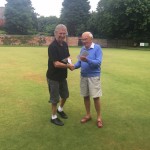 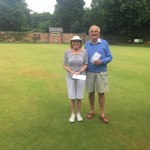 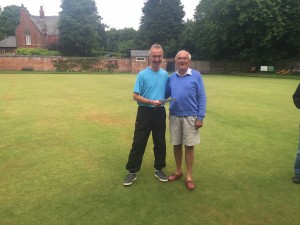 A plate competition was held for 1st Round losers and this was won by Ken Rimmer with a 15-8 win against Norman Simpson in the final. 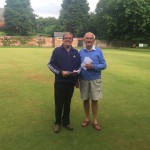 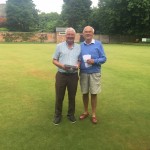 CORONATION CUP
Members are reminded that the next club competition will take place this coming Sunday, 12th June, when we will compete for the Coronation Cup. This will be a singles handicap and participants are asked to report to the green by 11.45am for a 12 noon start. A plate competition will be organised for those players losing their first game.

GREEN BOOKINGS
Please note that the green will be unavailable to members on the following dates :- SUNDAY 19TH JUNE – OPEN SINGLES – 10.00am start (spectators welcome)