In the top half of the draw, the 2011 President’s Cup winner, Sue
Andersen, was in fine form and picked up some impressive
scalps. Sue’s first victim was former club President
Bill Nowell (21-15), followed by another excellent win
against 2013 Rose Bowl winner Jim Halsall, also by a 21-15
scoreline. The quarter-final was expected to be a difficult
test for Sue against Dave Bedford, who had enjoyed a 21-10
success against Kyle Dawes in the 2nd Round. It was Sue,
however, who progressed to the semi-final with a 21-9 win,
where she faced Wayne Graham. Wayne had reached this stage
with wins against Pat Miller (21-7), Sue Davies (21-20) and
Tony Livesey (21-11). Sue and Wayne were locked in a close
battle until the 16th end, when Sue scored the first of 3
successive twos to take an 18-13 lead and despite Wayne
pulling a chalk back, it was Sue who reached the final, the
scoreline being 21-14.

The bottom half of the draw saw Eagles’ player Fergal Wright
progress comfortably to the semi-finals with wins against
Don Parish (21-9), Ted Moule (21-13) and Margaret Langley
(21-15). Fergal’s semi-final opponent was the club’s
2015 President, Ray Sutton and this was to prove a close
battle between one of the club’s youngest players and
the vastly experienced Ray. Although Fergal had to concede a
handicap of four chalks against Ray, he seemed on course for
a comfortable win, leading 15-11 after 17 ends. Ray is
always a tough opponent however and won five out of the next
seven ends to take an 18-17 lead and go within a couple of
ends of victory. At this stage though, Fergal was able to
maintain his concentration and scored the four singles
required to take him into the final, the winning margin
being 21-18.

The outcome of the final was difficult to predict but Sue, starting on
+4, looked to be in the driving seat as she won four ends
out of the first six to lead 10-3. From this point though,
Fergal got in and playing a straight mark extremely well,
won eight consecutive ends to ease into a 14-10 lead. Sue
was able to pull a couple of chalks back but Fergal was able
to continue his consistent form to eventually run out a
21-13 winner and take the 2015 Rose Bowl. Congratulations to
both finalists on an excellent standard of play throghout
the competiton but especially to Fergal Wright on claiming
his first Hesketh Arms singles title.

The next weekend event will be a Round Robin this coming Saturday,
2nd May, starting at 2.00pm. All members welcome to
attend.

Chairman’s Message April 2015
The 2015 season is well and truly underway and most of you will have been down to the green already. I am sure you will agree that it is in excellent condition and the surrounds, including the new boards, flagging and lights are a big improvement. I would like to thank all the members that have been involved in the numerous projects.
All the club’s teams have started their campaigns. I am very pleased to report that most of the Captains have good sized squads. However, if anyone is interested in playing for a team we can accommodate you. We are especially looking for players on a Wednesday afternoon so please contact one of the committee – contact details can be found at the bottom of the message.
The club has made the decision that we will be entering additional teams in both the Burscough League and the Southport Parks League for the 2016 season.
The first of the club competitions is on Sunday 26th April – please note the earlier start time of 12.00pm for all competitions this season. There is a full list of this season’s competitions on the website and in the clubhouse. The Tuesday Round Robins are also underway and you are welcome to join Jim and his helpers any time you wish.
Is there anyone in the club who would like to lead a new project? The flower bed on the graveyard side requires a bit of love and attention. We would like a member or members to volunteer to lead a tidy up and makeover. Once we have someone willing to take up the challenge you will receive all the support you need from the club.
Likewise, does anyone fancy the task of stripping down and painting the green benches? You will be reimbursed for the materials.
Please note that all subscriptions are now due. If you have not paid, then please can you pass them on to your captain or a committee member as soon as possible.
If you are interested in volunteering for any of the above, or you would to be kept informed about the new teams, or if you wish to feedback any ideas please contact any of the following :-
Chris Harding –  07761733024 and  chrisharding10@hotmail.co.uk
George Hitchmough – 07977 500131 and  secretary@hesketharmsbowlingclub.co.uk
Mike Milne – 07752352065 and hesketharms21@yahoo.co.uk
Website – https://www.hesketharmsbowlingclub.co.uk/
Facebook – Find and like us

EASTER ROUND ROBIN
Many thanks to all those who supported the Club’s Easter Round Robin on Saturday. A large turnout of 40 members took advantage of the fine Bank Holiday weekend weather to get some early season practice and found the green to be in excellent condition.
At the end of an enjoyable afternoon’s bowling, the Club’s new President for 2015, Ray Sutton, presented the prizes. 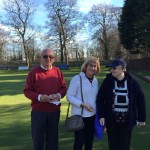 In joint 4th place on a score of +18 were Margaret Langley and Pat Miller. 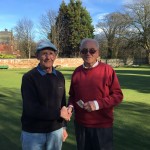 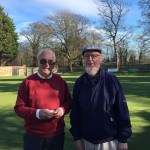 Jim Finnimore was third with +19, just behind Mike Burrill in 2nd place on +20. 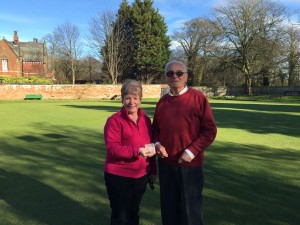 However the clear winner, with an impressive aggregate of +23, was Sue Andersen.