June Message from the Chairman

I have been delighted to hear all the positive feedback from our members and visitors about the excellent condition of our green and the tidiness of the surrounds. It is the committee’s priority to maintain these standards and with the continued support of everyone involved in the green maintenance I am confident we will do this.
At the AGM it was announced that the club were looking into the possibility of providing floodlights. I am under no illusion that this will be a testing project with many logistical and cost issues. We have received quotations and that has given us a clear indication of what we can achieve. Mike Burrill is in the process of putting together a planning permission application which he couldn’t start until we had the quotes from the floodlight companies. I will keep you all updated on the progress.
The competitions and round robins are receiving impressive turnouts. Congratulations to Eileen Rawcliffe and Joe Parker for winning the Spring Pairs.
Talking of competitions the club are holding a photography contest. We would love to see your photos of anything that is connected to the bowling club. The best 3 will receive a prize at the awards night and some of entries will be shown on the website and Facebook. It is very simple to enter just email your pictures to secretary@hesketharmsbowlingclub.co.uk
In last month’s message I asked any ladies that wanted to form an afternoon team to come forward. Some did, so there will be a list going up on the notice board.
There are plenty of activities coming up so please visit our website, find and like us on Facebook, email the Secretary ‘secretary@hesketharmsbowlingclub.co.uk’ or phone me on 07761733024.
Keep up the good work.

Sunday 15th June saw 19 players compete for the Coronation Cup and it was pleasing to see a couple of members playing in their first club handicap.
The top half of the draw saw Brian Jones progress to the semi-final with wins against Mark Rowlinson (21-12) and John Walton (21-17). Brian’s semi-final opponent was Irene Nowell who had come through two tough games against Mark Eustace (21-19) and Jim Halsall (21-20). Irene had also had to play a preliminary round game and this proved to be a disadvantage in the semi-final with Brian running out a comfortable 21-8 winner.
Brian’s opponent in the final was Jim Finnimore, still in fine form following his succes in the Botanic Garden’s President’s Cup the previous day. Jim reached the final with wins against Mike Dunlop (21-12), Dave Bedford (21-19) and John Stennett (21-13).
With both players starting on +2 a close final was expected and with Brian leading 11-10 it looked like going down to the wire. However, by winning 5 out of the next 7 ends, Brian took a decisive 18-12 lead and although Jim acored a couple of singles to narrow the gap, Brian was able to score the three chalks required to secure a 21-14 victory. Congratulations to Brian on winning The Coronation Cup for the second time, having won it previously in 2009. Well done also to Jim who narrowly missed out on an impressive double of two tournament wins in one weekend. 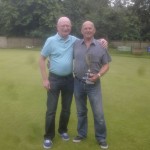 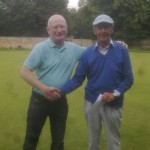 A plate competition was held for first round losers and this was won by Mike Dunlop, who defeated Mark Rowlinson 15-14 in a close final.

The next competition is to be held on Saturday 28th June, when members will play for The Vice-President’s Trophy (1.00pm start). This will be a pairs event and members are reminded that guests will be welcome to take part in this competition.