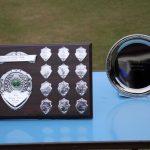 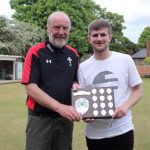 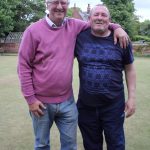 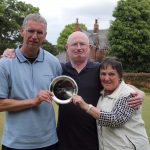 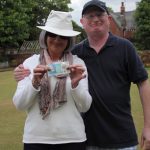 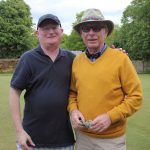 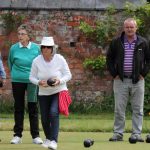 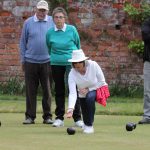 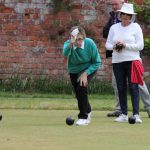 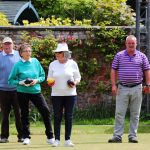 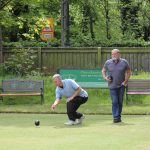 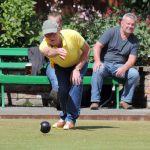 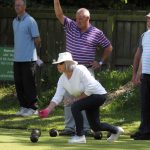 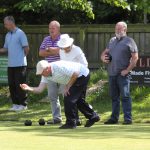 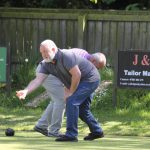 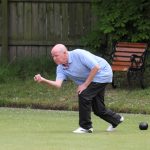 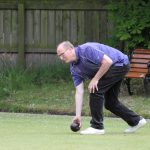 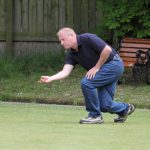 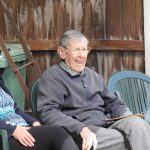 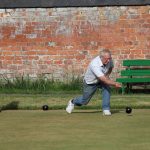 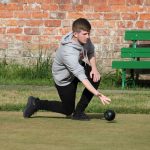 SPRING PAIRS 2017
30 members attended the club on Saturday to compete for the Spring Pairs Trophy. As usual, partners for the afternoon were drawn randomly and this produced some strong pairings.
In the top half of the draw Wayne Graham and Phil Richards progressed to the final with wins against Jeff Brown and Laurie Townson (21-16), Les Miller and Peter Smith (21-13) and in the semi-final, Kevin McCormack and Pat Miller (21-13). Their opponents in the final were to be Alex Rimmer and Fergal Wright, who had defeated Barry McArthur and Ken Rimmer (21-7), Bill Bloor and Noel Morgans (21-18) and Pat McArthur and Richard Rawcliffe (21-14).
Although Alex and Fergal won the first two ends of the final, Wayne and Phil produced a winning run of six ends to establish commanding 15-7 lead and looked favourites to claim the title. Although Alex and Fergal won the next three ends to close the gap to 13-15, Wayne and Phil were able to maintain the advantage, closing in on victory at 20-16. However, in one of the most exciting finals seen at the Hesketh, Alex and Fergal ran out to take the Spring Pairs Trophy by the narrowest of margins. Congratulations to all four finalists for producing an entertaining finale to competition. In particular, well done to Alex on his first tournament win, having lost in four previous finals.

The Plate competition for those knocked out in their first game was won by Jim Halsall and Pat Jones, who defeated Chris Harding and John McCabe 15-8 in the final.

The next competition will be the Coronation Cup, a singles handicap and will be held on Sunday 18th June, starting at 12 noon.

SPRING PAIRS
Members are reminded that the next club event will be the Spring Pairs, which will take place this Saturday, 13th May starting at 12 noon. Please report to the green by 11.45am for registration to allow for a prompt start. Pairings will be drawn at random on the day.

SOUTHPORT FEDERATION
The Southport Federation team got to off to a successful start to the season in April, winning their fixture against Doncaster ‘B’ by 16 games to 8.
The Hesketh Arms was well-represented, with Alistair Adams, Kez Adams, Mike Milne, Mark Wilde and Fergal Wright all playing in the home leg at Scarisbrick Bowling Club and Chris Harding and Jon Roberts playing in the away leg. Special mention must be made of Fergal Wright who won 21-8 and to Kez Adams who won the home team man of the match award for his 21-10 win playing at number 1 block on his Federation debut.
The next game for the Southport team is on Sunday 21st May and the home leg will take place at Fleetwood Hesketh, starting at 2.00pm. The Hesketh Arms will be represented at home against Rochdale Ladies by Mike Milne, Mark Wilde and Fergal Wright. Alistair and Kez Adams have been selected to play at Milnrow in the away leg. Spectators for the game at Fleetwood Hesketh will be very welcome, to help the Southport players continue their winning start to the season

GREEN BOOKINGS
Please note that the green will unavailable for members on the following dates due to private bookings :-
Thursday 8th June – 11.00am – 6.00pm
Sunday 2nd July – all day
We apologise for any inconvenience caused.
We would request any members who have not yet paid their subscriptions to please do so.
Especially any team members.

ROSE BOWL 2017
An excellent turnout of 38 members took part in the Club’s first internal competition of the season on Sunday, on a mainly fine day.
In the top half of the draw, Fergal Wright, winner of the Rose Bowl in 2015, made comfortable progress to the quarter-finals with wins against Alex Rimmer (21-10) and Pat McArthur (21-15). Fergal’s quarter-final opponent was three-time Hesketh Arms singles winner Mike Dunlop and this was expected to one of the games of the day. Mike started strongly, winning seven out of the first eight ends to lead 12-1 but Fergal fought back and won eight out of the next nine ends to take the lead at 14-13. From then on, it was nip and tuck with Fergal eventually progressing to the semi-final with a 21-19 win. In the semi-final, Fergal faced former Club president, Bill Nowell, who had enjoyed three close victories over Janice Hobson (21-20), Dave Warrior (21-19) and Dave Bedford (21-20). These close games probably proved to be a disadvantage to Bill in the semi-final as Fergal ran out a 21-10 winner.
The bottom half of the draw saw last year’s Coronation Cup winner, Brian Sutton, make steady progress to the semi-final with wins against Jeff Brown (21-19), Ken Rimmer (21-17) and Wendy McLoughlin (21-16). Brian’s semi-final against Richard Rawcliffe was closely fought, with Brian holding a narrow 16-14 lead after 21 ends. However, Brian was able to win the next four ends to reach another final, the final score being 21-14.
The final started off with neither player dominating and after eight ends Brian led 8-6. At this point, however, Fergal hit top form and won ten consecutive ends to establish a 20-8 lead. Although Brian was able to score a double to make it 10-20, Fergal scored the one chalk required to claim the Rose Bowl for the second time in three years. 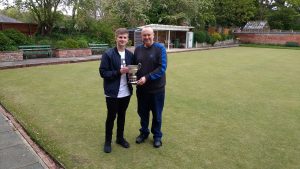 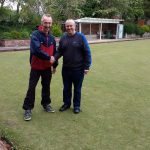 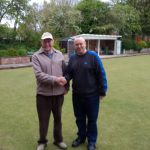 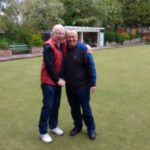 A Plate competition was also held and this was won by Peter Smith, who defeated Janice Hobson 15-12 in a closely fought final. 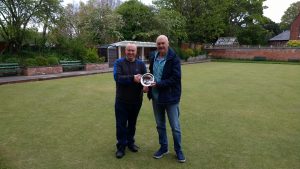 Many thanks to all those who contributed to a successful start to the Club’s competition season.

The next event will be the Spring Pairs, which will be held on Saturday 13th May. Pairings will be drawn on the day. Please report by 11.45am for a 12 noon start.