CHAIRMAN’S SHIELD
The next club competition will take place this Saturday, 1st August, starting at 12.00pm. This will be the Chairman’s Shield, which is the Club’s thrid and final pairs of the season. As usual, pairings will be drawn randomly and members are reminded that guests will be allowed to participate in this event. Please arrive to register by 11.45am to allow for a prompt start

ROUND ROBINS
Dates have been set for weekend round robins in August and September. Due to a shortage of free Saturdays, these will be held on Sundays :-

LV LEAGUE PAIRS
This year the LV League is running a pairs competition in September once the league fixtures have been completed. Qualifying rounds will take place at neutral greens on Tuesday 22nd September, with the finals night being the following week, 29th September, venue to be confirmed. The singles competition completed last week was considered a great success, attracting a full entry of 64 players, so it would be good to see the Hesketh Arms well-represented in this competition. The entry fee is £6.00 per pair and anyone interested should notify George Hitchmough, Chris Harding or Mike Milne as soon as possible.

PRESIDENT’S DAY 2015
On Sunday, Ray Sutton, the Club’s President for 2015, welcomed 34 club members, along with numerous friends and supporters, to the green to compete for the President’s Cup. We were very fortunate that the weather was much better than had been forecast and a fine afternoon of bowling was enjoyed by all those who took part.
In the top half of the draw, Jim Halsall progressed to the last eight with wins against Les Miller (21-18) and Tony Livesey (21-13). In the quarter-final, Jim faced formidable oppostion in Margaret Langley, who had previously won this title 20 years ago in 1995. After a tough battle, however, it was Jim who prevailed, winning a close game 21-18. Jim’s semi-final was another close affair against Brian Sutton, who at one stage led 16-13. Three 2s for Jim put him back in control and although Brian scored a couple of 1s to close the gap to 18-19, Jim was able to score the two singles he required to secure his third 21-18 win of the afternoon.
The bottom half of the draw saw 2011 winner, Sue Andersen, progress to the quarter-finals with wins against Ray Sutton (21-14) and Stephen Askew (21-16). The quarter-final proved to be a closely fought contest against Sue Davies, with Sue Andersen just crossing the line with a 21-20 success. This win set up a semi-final against another previous winner of this competition, Mark Rowlinson. Mark had to concede a handicap of four to Sue and this proved difficult to overcome. Although Mark was able to level the match at 7-7 and 14-14, it was Sue who found her form at the right time, scoring three 2s in the last five ends to reach the final with a winning score of 21-16.
In the final, the first five ends were nip and tuck but Sue was then able to win four consecutive ends to open up a 12-5 advantage which was to prove the crucial phase of the match. Jim fought hard but struggled to count in more than singles and was never able to close the gap to less than three as Sue eventually eased to a 21-14 win. Congratulations to Sue on winning the President’s Cup for the second time and also to Jim on reaching another final. 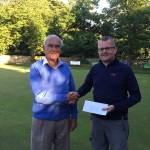 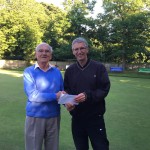 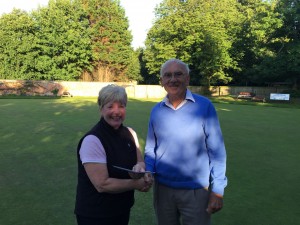 A Plate competition was held for 1st round losers and this attracted 16 entries. The eventual winner was Tony Wakefield, with a narrow 15-14 win over Richard Rawcliffe in the final. 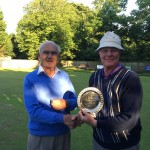 A special thank you to Ray and Frances Sutton and their helpers for providing refreshments and organising the raffle, with help also from Margaret Langley and Irene Nowell. In total, £138.00 was raised towards club funds on the day. Finally, many thanks to all those who brought raffle prizes and purchased tickets and congratulations to Ray on another successful day for the club.

JULY ROUND ROBIN
Many thanks to Richard and Eileen Rawcliffe for their help in running the July Round Robin. 12 members took part in this latest event in the Club’s busy calendar. The eventual winner was Mike Davidson with an aggregate of +26, closely followed by Richard on +22.

The Club will hold weekend round robins in August and September and the dates for these will be announced next week.

LV LEAGUE SINGLES
Congratulations to Fergal Wright on reaching the last eight of the LV League singles competition. The final 8 play off at Fleetwood Hesketh next Tuesday, 21st July, starting at 7.00pm. Support for our club’s last remaining representative would be appreciated on what should be an excellent night of bowling.

GREEN BOOKING
Please note that the green will be unavailable for use by members on the afternoon of Friday 7th August as we have a private booking. The morning round robin will take place as usual.